DC: Hey Sharon. Thanks for having me at I Smell Sheep. When the guys found out that I was coming on, I had a hard time trying to convince them they all couldn’t join. They’re a protective bunch. It was decided I needed at least one of them to come along just as a safety precaution. I’m not sure if you’ve had the pleasure of meeting my good friend Tyler, the Horsemen of Pestilence.
Tyler: I was happy to do it. I had to persuade the guys that my gift would be the best if something unseemly happened. Cam’s rage and brute strength might make a bad situation worse and Derek has to wait until someone is close enough to touch. I can take out an entire room before they even get close to you.

DC: Well, of course, I appreciate your guys’ protectiveness, but I doubt it’s necessary for a guest blog. The fact that you get to state your grievances with me had nothing to do with it though, right?
Tyler: Well, keeping you safe is a bit self-serving. Without you none of us would exist. The confession is just a bonus because I’m a bit upset.

DC: Uh oh.
Tyler: Uh oh is right. Now I’m not saying I wanted to be a love interest cause really there was enough play for Evie, but I wasn’t even considered. How could you do that to me? I thought we were better friends than that.

DC: Well sweetheart. You’re the nice guy. The one that’s friend zoned, at least where Evie’s concerned and we are friends, but I can’t let that rule my decisions. You know I’m just the mouthpiece. You all do what you want.
Tyler: Don’t sweetheart me. I’ve heard Cam call Evie it enough to know that it’s not meant as sweet as it sounds. You’re not going to placate me here. Cam’s a tool. Derek’s selfish. And Asher… Really? Asher was chosen over me.

DC: Ty, trust me when I say it was in everyone’s best interest that you stayed out of that snake’s nest. You’re the calm in the world of chaos. The other’s listen to you, not just because your oldest because let’s face it, Cam wouldn’t even care in the slightest, but because you had no interest in our girl, Evie. You and I know whom she’s meant to be with.
Tyler: (Sighs) You’re right, of course. They deserve each other. They both need happiness. Wait. You just made me say that, didn’t you? You’re the author so you control my thoughts and even my words. You don’t want me to want her.

DC: Well, no and neither do you. I don’t force you to say anything you don’t want. Even though I created you, you’re still your own person.
Tyler: Any chance I can convince you to give me a love interest?

DC: Hmm… Well, I don’t want you to be lonely, Ty. We’ll have to see. The next two books are still going to be all about Evie. Maybe in book three, I can see what I can do.
Tyler: That’s all I ask. I’m not saying I’m superficial, whoever it is, guy or girl, make them panty-dropping sexy. What are you calling the next two books anyways?

DC: Book two is Obsidian and book three is Phoenix. I haven’t set a release date, but a cover reveal for Obsidian is coming very soon. I’ll do my best for the panty-dropping effect.
Tyler: Those are some interesting titles. Any particular reason for those names?

DC: You’ll have to wait and find out just like everyone else. Now let’s get you back to the other horsemen before Cam and Derek kill each other. 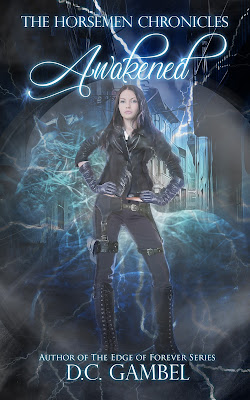 Awakened (The Horsemen Chronicles Book One)

Evie has lived most of her life as a recluse, terrified that she might hurt someone. On her twenty-first birthday she meets Derek who informs her there’s a reason behind her gifts.

As someone that had to spend her entire life avoiding human contact, learning the truth about her origins as one of the Four Horsemen was a hard pill to swallow. Especially once she realizes that her fellow Horsemen are the only people she’d ever met that can withstand her touch.

The struggle to overcome her seclusion becomes very real when Evie discovers an attraction has sprung up between herself and one of her fellow Horsemen. Nothing good can come from pursuing the allure, especially when she knows that it not only would jeopardize her team, but her heart as well.

Excerpt:
“Break it down for us, Cam.”

“I met my informant last night,” he said, leaning between the opening of the front seats. I angled myself to face him so I could hear him better. “He claims that Axel Reese, pack alpha of Summery, was contacted by Asmodeus.”

There was a swirl of profanities, but I was clueless to why. So I asked.

“Asmodeus is one of the seven princes of hell. He’s also the prince of lust. Apparently they were rumored to have met the night the succubus attacked the fraternity party,” Cam went on to explain.

“I’m sure that was no coincidence,” Tyler muttered. “I thought the succubi broke off from Asmodeus decades ago when he started demanding that they worship him as a god.”

“They did, but with the seals being broken the demons of lust are returning to their master in hopes he can protect them from the apocalypse. They don’t even realize that he’ll use them a cannon fodder to save his ass. If Axel really did meet with Asmodeus we need to be prepared for a shift in the packs loyalty.”

“Why not just go to Asmodeus first?” Derek asked keeping his eyes forward.

“Axel would be a lot easier to handle then walking in to Phoenix.”

“It’s a demon club,” Tyler answered. “We don’t get the warmest reception. Asmodeus owns it.”

“Stole it is more like it,” Derek chimed in. He glanced at me. Seeing the quizzical look he elaborated. “It used to be a safe haven for the powers of good. Demons attacked it as a distraction for whoever is breaking the seals. The club has been in demon hands for almost three decades after two centuries of it being in the hands of good. Only positive thing is the demons can’t put up their wards to keep us out.”

“Yes they have,” Cam agreed. All three men chuckled and I felt like I was being left out of the joke.

“Hair of the dog?” I asked when we pulled up outside the dive bar. “I thought you were joking.”

Cam chuckled. “They’re not the most creative bunch.” His hand found the small of my back as we headed to the door. I could feel its warmth seeping though the fabric of my shirt almost like it was melting it away until his skin touched mine. I shook my head subtly clearing those thoughts. “You stay near one of us and we’ll make sure no one touches you. What skin is exposed no one should be touching anyways unless they’re looking for trouble.” The other two nodded in agreement.

About the Author:
website-FB-twitter
Instagram-goodreads
D.C. Gambel is a mother, army wife, and a hopeless romantic. Romance has always been her genre of choice whether it’s contemporary, historical, paranormal, or even pushing towards erotica in both reading and writing. When she first decided to try her hand at writing, romance was the obvious choice. Getting lost in a different world, living unimaginable lives is something she strives for, even if it’s just a temporary enjoyment.