Ever wonder what would happen if TWILIGHT met DIVERGENT? Find out Colleen Myers’s BLOOD WILL TELL, book 1 in her new Blood Series! 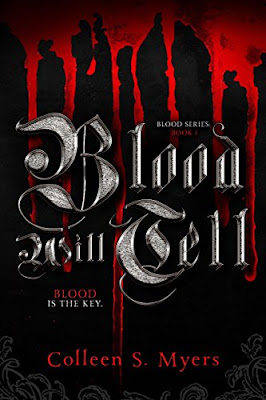 Genre: YA Dystopian/Fantasy
Format: Digital eBook
Unbeknownst to eighteen-year-old Isabelle, her dad inserted a vital DNA sequence into her blood that made her resistant to the Immortalus virus, but unlocked other capabilities that prove to be the key to the war between the human and vampire race.


Exclusively on Amazon and available with Kindle Unlimited!
Add Blood Will Tell to your Goodreads TBR pile!

About the Author:
Website-FB-Twitter
Goodreads
Colleen S. Myers was raised in a large catholic family in the outskirts of Pittsburgh, Pennsylvania where she grew up on Harlequin teen romances and stories from her mother’s days as a paramedic. She went on to attend Allegheny College majoring in Biology and English.

After college, Colleen spent a year in service in the Americorp giving back to the community at a local Pittsburgh Women Infants and Children Clinic (WICC) before attending Kirksville College of Osteopathic Medicine on a military scholarship.

Upon completing medical school, Colleen attended residency at Andrews Air Force Base in Maryland and was on base in Washington, DC during 9/11. She earned three meritorious service awards from the military. After serving seven years of active duty, she promptly landed a position at the VA to provide fellow veterans with optimum medical care. Still an avid fan of romances into adulthood, her love of the genre inspired her to hone her craft as a writer, focusing on contemporary romance and science fiction. Her background in medicine and the military provides an inspiring layer of creative realism to her stories and characters.

Her first book, Must Remember, the first book in the Solum series, is published by Champagne Press. The sequel, Can’t Forget, coming in June 2016, is the recipient of the 2015 RWA New England Readers Award.

Colleen currently resides in Pittsburgh, Pennsylvania with her husband and son, and spends her spare time writing. She is also working on a new contemporary romance.