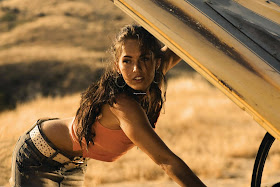 I am the first to admit I have never nor will I ever be a fan of Megan Fox in any capacity. I am so freakin thrilled she finally got the boot from the Transformers franchise! Oh happy day!!!!

There are some mixed reports as to why she got cut, her saying of course "It was my decision to quit" uh huh sureeee we all believe that. A multi billion dollar franchise and you just wanna up and quit? Yeah the Harry Potter kids feel that same way, oh thats right they don't!
Some reports say the director Michael Bay cut her out of the next flick "do to critical comments she made about the film". Sum it up....I don't care what she said I am just happy she is gone. :) Men hate me all you want for this one!
She cant act at all, no personality, she brings nothing to these films other then a "hollywood body". And come on did anyone really believe she knew what she was talking about looking at Bumblebees engine? Ummm no. **I roll my eyes every time I see this part.
And than in the second one she works at a bad boy (no pun intended) motorcycle shop?! Are you kidding me? It was just too much for me. Maybe if she was a believable actress I would find something I could be ok with, but the fact is she is not.
She tainted these films in my eyes and I love my Transformers, and Michael Bay, just my opinion of course boo me if you want to! Bye Bye Megan!!!!!! :) bo-yay
KD
Katie Dalton at 7:59 PM
Share