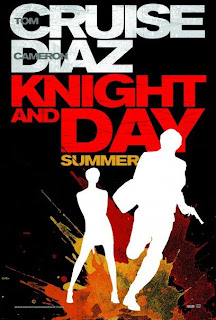 Knight and Day directed by James Mangold, staring Tom Cruise and Cameron Diaz hit theaters this week. Low box office numbers so far but those should pick up as the weekend is now underway.

I would like to state for the record that I came up with "Knight and Day" long before it was used for a movie title! Sure my name was for an imaginary cleaning company I would never own, but still my point is they totally copied the name and I should be getting royalties! I'll let my lawyers handle all the little details...

I, personally, like Tom Cruise (even if he is a tad wacky) its nice to watch him let lose and not take himself so seriously in roles now and then. Les Grossman is to date the best comedy character I have ever seen Tom play. "Take a big step back and literally F@#K your own face!" Classic. :)
Plot Summary:
June Havens (Diaz) finds her everyday life tangled with that of a secret agent (Cruise) who has realized he isn't supposed to survive his latest mission. As their campaign to stay alive stretches across the globe, they soon learn that all they can count on is each other.
Cameron gives a fun performance, not her best but defiantly not the worst I have seen from her. Overall the movie is your typical fun summer movie, nothing spectacular about it just what you would expect based on the trailers. Its right in the middle. :)
KD
Katie Dalton at 2:18 PM
Share