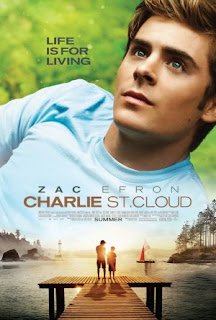 Charlie St. Cloud directed by Burr Steers hit theaters recently, the positive thing about me seeing this was I didn't have to pay. Free AMC pass thank the lords! (of the underworld, of course)

Movie stars the young hottie Zac Efron, only 2 shirtless scenes in the whole movie! bah, boo!
Charlie Tahan plays the younger brother to Zac's character, given away by all the trailers we all know he dies in a car accident. Amanda Crew, Ray Liotta and Kim Basinger round out the rest of the cast.
I will say that Zac did a decent job in this film, I fell in love with him after 17 Again and this movie just added to the feeling. But no matter how cute the boy is, the movie has to have a great script for the film to work. I dont know how the book version of film was but I can only hope it's far better than the film.
Charlie Tahan was disappointing as the younger brother, he is so young and I hate picking on a kid but he was not great. If you look at young actors like Dakota Fanning, at his age, they were killing it on screen. Sorry but a lot of eye bulging and pouty looks are not enough, especially in capturing the dramatic feel in the movie. To be frank (and you can be who'ev) he sucked. Sorry.
The secondary characters did a better acting job then the front ones if you ask me. Liotta and Basinger were excellent in their roles but of course what else is to be expected. The surprise of the film for me was actor Augustus Prew who plays Zac's best mate, exceptional in his role and I look forward to watching for him in other films. :)
Overall Charlie St. Cloud was middle of the road for me, not great but not awful. If you like sappy love stories with lots of holes in the story line and mediocre acting then by all means knock yourself out! Or just wait for the dvd. :)
KD