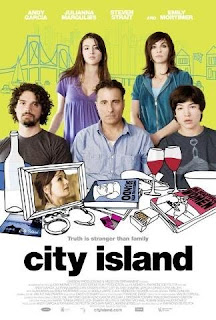 City Island, written and directed by Raymond De Felitta is available on dvd now. Wonderfully acted by Andy Garcia, Julianna Margulies, Steven (yummy cakes) Strait, Ezra Miller and Emily Mortimer this film had me hooked from the start, completely won me over. :)
Plot Summary:
Meet the Rizzos, a family that might get along a lot better if only they could tell each other the truth. Dad Vince is the worst offender. But since the prison guard won't even admit that poker night is in fact acting class, how's he ever going to explain about his illegitimate son? His daughter works as a stripper when she's supposed to be in college, while young Vinnie Jr has a secret sexual fetish that involves a 24-hour webcam and the family's 300-pound neighbor. Vince's wife Joyce is the family's rock, but it's been a year since she enjoyed intimacy with her husband, and it's no surprise she thinks poker night spells A-F-F-A-I-R. When former prisoner Tony enters the Rizzos' lives, Joyce begins to suspect that the handsome young Tony isn't who Vince says he is. City Island is a funny, touching and smart family tale about the secrets of the past catching up with the lies of the present, and accepting that nobody's perfect - least of all your loved ones.
Who doesn't like Andy Garcia? Not me thats for sure. *makes goo goo love eyes* Mr. Garcia delivers yet another awesome performance, you completely fall for his character. Oh the webs this family weaves. You know ALL their secrets are going to come crashing down in the end; predictable yet fantastic to watch the epic meltdown.
I laughed so hard every time the young son argued with his family, little deja vu reminding me of my own braty-yet-loveable-brother. Hugs brother man. Movie is not a chick flick but a life movie for all, humor that reaches young and old any gender will enjoy this film. Life lessons abound. ;)
Don't miss this one. Redbox for $1 you have no excuses folks! lol
*not sure how my new piggy friend can rent this one, maybe you can find it online?
KD