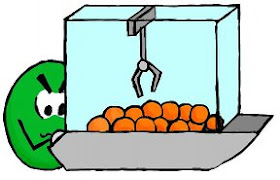 This time around, I was told by our virtual committee of 20 that they would only be available for a single vote. It would seem like Chuck the Woodchuck had convinced our voters that they were not being fairly compensated for their time... and are now refusing to do any more than a single vote per contest. Grrr! Dang Woodchucks!

To get around this, I had a series of orange ping pong balls with each contestant's name printed in a heat activated ink. I then asked one of the Marutachi (Midori) to mix the balls up and choose 4 of them using a claw machine.

When I stuck the balls under a heat lamp, we could see the names who'd be voted upon clearly...

The three names were put before the committee to vote and here is how that went:

Katie will be contacting you and you'll have one week to respond!
rl337 at 12:07 AM
Share