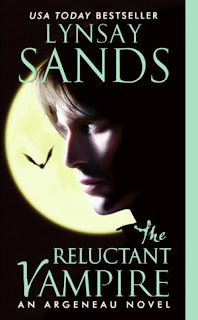 The Reluctant Vampire: An Argeneau Novel by author Lynsay Sands is the latest book in her Argeneau Vampires series. Lynsay has been a hit or miss author for me over the years. I have found several of her stories so wonderfully exciting that I keep going back to her, but every other book happens to fall flat. This story is one of those times...dull with no character development. :(
Plot:

Has this immortal finally met her match?

Rogue hunter Drina Argenis (from the Spanish side of the Argeneau family) has been many things in her years as an immortal, but bodyguard/babysitter to a teenage vampire is something new. There's an incentive, however: the other vampsitter, Harper Stoyan, may be Drina's life mate.

Trouble is, having just lost a life mate, Harper is resigned to being alone. He's completely unprepared when sexy and unpredictable Drina bursts into his life to reignite his passions. Can Drina, with a little matchmaking help from their teen charge, tempt this reluctant vampire to take a chance?

Or will a dangerous, unseen renegade kill Drina and Harper's one chance at happiness?

Maybe I'm just not a fan of family novels, but with so much talk about shopping trips and making meals etc, I had to wonder were all the action went? Sucked through a worm hole maybe. Pages and pages of filler and nothing that grabbed hold of me. I don't really care who puts on who's boots or inter-character debates about what car to drive. I want an exciting story that can suck me in like with Sands other novel The Renegade Hunter. That book was fantastic! Anything that got almost exciting in this story turned out to be a false alarm. It felt very mushy around the edges for my tastes.

Here are a few specific examples of what I'm talking about. Harper lost his wife a year ago and is "reluctant" about having a new life mate. I was expecting to see a lot more in his character, but only a few pages pass with him feeling any guilt whatsoever! Almost immediately, Bam! He wants to rip Drina's cloths off and get down to it. As the story progresses, several attacks are taking place against the vamps who are supposed to be protecting a teenage girl. Our hunter Drina doesn't get around to investigating these attacks. In fact, all the tuff stuff alluded to from her past end up never being used in the story! What happened? An immortal who used to be a gladiator and pirate turns into a kitten over night? She was completely soft and reliant on others. The only redeeming thing about this story was the romance between Harper and Drina, but that aside the plot and characters were just a waste of time.

Unfortunately this book is lacking so much I can't really recommend it to anyone. I'd say pick up The Renegade Hunter instead. I have to point out that after all this, I wont give up. I'm still holding out for other gems in the series.