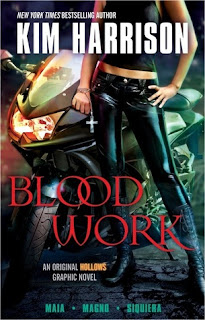 When Ivy met Rachel, the result wasn’t exactly love at first sight. Sparks flew as the living vampire and the stubborn witch learned what it meant to be partners. Now Kim Harrison, the acclaimed author of Pale Demon and Black Magic Sanction, turns back the clock to tell the tale—in an original full-color graphic novel.

Hot-as-hell, tough-as-nails detective Ivy Tamwood has been demoted from homicide down to lowly street-crime detail. As if rousting trolls and policing pixies instead of catching killers wasn’t bad enough, she’s also been saddled with a newbie partner who’s an earth witch. It’s enough to make any living vampire bare her fangs. But when a coven of murderous witches begins preying on werewolves, Rachel Morgan quickly proves she’s a good witch who knows how to be a badass.

Together, Ivy and Rachel hit the mean streets to deal swift justice to the evil element among Cincinnati’s supernatural set. But there’s more to their partnership than they realize—and more blood and black magic in their future than they bargained for.

Unfortunately I found it just okay. I don’t know if my judgment is colored by my love of the writing in the Morgan novels, but the story was kind of disjointed and rushed. It is kind of like comparing a movie to the novel. Ivy’s attraction to Rachel seemed to happen way too fast. If I hadn’t read the novels I don’t think Ivy and Piscary’s relationship would have made much sense.

The cover art work is absolutely beautiful, but the illustrations inside were just okay. I liked Rachel’s look, but Ivy and Kisten’s were inconsistent. Sometimes they were very good and other times kind of yucky.

I did like the fact that it is told from Ivy’s point of view, and I loved Rachel and her funny snarky self. I am not ready to give up on this graphic novel just yet. It was the first, and the next one will probably have some adjustments based on feedback. I look forward to checking it out, but I don’t think I can recommend paying hardback prices unless you are a die-hard Rachel Morgan fan and want to have it for your collection.

If I wasn't such a Hollows fan I would probably give this 2 1/2 sheep, but because I am a softy and they did a great job with Rachel's character, I give this...

3 Ketchup eating Sheep (I made a Hollows reference