Book Signing with Jeaniene Frost, Melissa Marr and Kelley Armstrong + give away

When I heard that Jeaniene Frost, Melissa Marr and Kelly Armstrong were coming to for a book signing, well…I decided it was time for a ROAD TRIP! Lucky for me it was only a 1 ½ hour drive to FlyLeaf Book Store.
This was the last stop on their three day tour. They had spent the last three days traveling in a Mini Cooper. 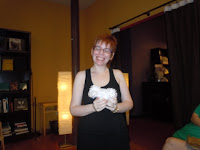 There were probably 50 people at the signing, including Jenna Black, author of The Faeriewalker Series and Dark Descendant (snagged some signed bookmarks from her <G>). Since all three authors would answer each question they only had time for 6 questions. That was a little disappointing, but they wanted to make sure there was time for all the signing, and I think they were ready to head home <G>

Unfortunately, no one asked anything terribly original. I got to ask a question and they opted for a funny one when I asked what kind they wanted (at the time I didn’t realize it would be the only question I got to ask). I asked if they let the dog/cat watch while they wrote the naughty parts. They laughed, but weren’t about to touch that <G>. Kelley did say when she wrote on her laptop in public she would just write “insert sex scene” because she was afraid someone would look over her shoulder and see. 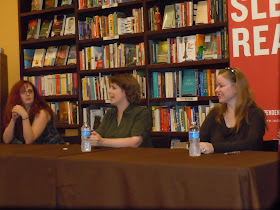 Here is some random info I learned: 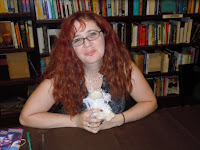 1. Melissa Marr use to teach English at in . I did my graduate work there!
2. Melissa stared writing when her husband was deployed overseas (Marine Corp). It was either write or worry.
3. When Melissa writes, she wants to block everything else out. She uses different playlists for each character and book to help with this. Kelley admitted to forgetting about her child at school because she was writing. Jeaniene told the story about how she walked out of her house to go to her day job and realized she wasn’t wearing any pants! 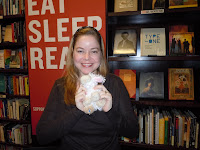 4. Melissa couldn’t give any details about the Wicked Lovely movie, but there is a script, director and they have moved to a new studio. They also got their first pick for one of the actresses, but again, she couldn’t say who <G>. They have also signed writers for the Graveminder TV show. Kelley said the rights to Bitten have been sold to Canadian TV.
5. When asked about inspiration Melissa said Folklore from her childhood. She said her next YA book was inspired by the phrase “Carnival of Souls” from a song by the group Murder By Death. Kelley said she got hers from everywhere! Jeaniene told the story of her dream of a half vampire woman arguing with a full vampire male about why she left him as the inspiration for Bones and Cat. The villain in her latest book came from a show she saw on the history channel years ago about the witch trials.
6. They all had the same advice about working with agents. Basically, you need to research and look out for scams. Jeaniene was a victim to a scam early in her career. You *never pay money. Kelley said the money only flows one way, to the author. 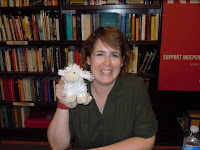 7. Melissa told a story about the day her book hit the NY Best Sellers list. She got a rejection letter saying her book was utterly unpublishable and unmarketable. She kept that letter <G>.
8. They all like the idea of the epublishing market, especially for short fiction. Melissa said authors get 8-12% of the money in traditional publishing. Ebooks bring in 15% and once expenses have been covered the rest is profit. It is a win-win for the author and traditional publishers are going to have to be more *fair about what they give to their authors. All three talked about how important editors are and how important it is to be professional. Writing might be all about creativity, but publishing is a business and you need to treat it like one.
Kelley says she has a story for Clay and Elena and thanks to epublishing, has a way to share that one day.
Even though I didn’t hear this…when you put three authors in a small car for three days, there is going to be “talk” of “things” “together”…but I didn’t hear this, okay?
That was about the gist of things. Everyone lined up and got books signed and pictures taken.
Contest

So, what do I have for you guys? I got the first book in each author’s series signed.
Halfway to the Grave, Wicked Lovely and Bitten. There are matching signed bookmarks with each book and a signed bookmark from Jenna Black with each book
I must confess that I screwed up with the Jeaniene Frost book. I accidentally gave her my name and she signed it “To Sharon, Life is short, bite hard”
I will pick three winners, but only one can be an international winner.
1. Tell me which book(s) you want to be entered for (you can enter your name for one, two or all three books)
2. Suggest a name for my little Sheep friend!
*double entries if you are a follower.
(will use the dryer method to pick the winners)
Contest ends: Sept 28 at midnight
Sharon Stogner at 1:20 AM
Share