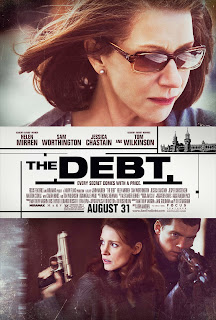 The Debt, directed by John Madden stars Helen Mirren, Sam Worthington, Jessica Chastain, Jesper Christensen and Marton Csokas. A gripping thriller that combines with international espionage is well made, not spectacular, but hopefully an Oscar contender.

Plot:
The espionage thriller begins in 1997, as shocking news reaches retired Mossad secret agents Rachel (Helen Mirren) and Stephan (Tom Wilkinson) about their former colleague David (Ciarán Hinds). All three have been venerated for decades by their country because of the mission that they undertook back in 1966, when the trio (portrayed, respectively, by Jessica Chastain, Marton Csokas, and Sam Worthington tracked down Nazi war criminal Vogel (Jesper Christensen) in East Berlin. At great risk, and at considerable personal cost, the team's mission was accomplished - or was it? The suspense builds in and across two different time periods, with startling action and surprising revelations.
The Debt is the American version of a 2007 Israeli movie of the same name, Ha-Hov or HaChov, in Hebrew, which was directed by Assaf Bernstein, and co-written by Bernstein and Ido Rosenblum. The Israeli film was never released to theaters in the United States, although it aired on American television on the Sundance Channel in October 2010.

Mirren's performance hands-down rises to the level of Academy Award-winning, but with a talented seasoned actress like her what more would you expect? That's not to say all the actors didn't bring their A-Game but she took it to another level with a solid believability you don't come across often. Twists and turns that will shock you up until the end credits roll. Without giving anything away let me just say I was moved by large portions of the film, especially the plot of hunting down a Nazi doctor who did unspeakable crimes against Jews. While I wish the focus would have stayed a bit more on that plot the movie does jump around from the past to present throughout, and you only get tidbits here and there as the film builds you up for a climatic ending. Overall a riveting story, with some intense fight choreography add to that an original musical score by composer Thomas Newman and you'll find yourself trapped in your seat.

This is an adult movie with adult themes so I strongly recommend leaving the little ones at home for this one.