Just When You Thought It Was Safe To Visit Tokyo 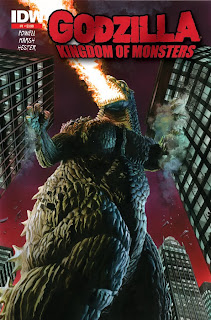 The King of the Monsters rises again and, for the first time in comics, he’s bringing lots of other beloved Toho monsters with him in one destructive saga! When Godzilla appears off the coast of Japan, the Japanese government must respond quickly to contain the disaster... but before long, other monsters start appearing all over the world. Can humanity survive this mysterious onslaught of giant beasts? Writers Eric Powell (The Goon) and Tracy Marsh bring the mayhem a-plenty, and artist Phil Hester (Green Arrow, Swamp Thing) brings the massive monsters to life!

Heehee. Guess who’s baaaaaaaack? Godzilla! The creators have given us a comic with the feel of the old Godzilla movies (Godzilla vs. The Bionic Monster, anyone?) and brought him into the modern world. Even with all our advanced weapons technology, we still can’t defeat him. You will never guess what happens when you nuke him

The story starts with Godzilla rising out of the ocean and heading for Tokyo, some things never change. There isn’t a lot of dialogue because, well, Godzilla doesn’t talk. He stomps! There are lots of big panels to give us a sense of how monstrous he is. The writers even poke fun at the President of the United States.

This is just good old fashion comic book fun. There are no plot twists and turns, only a little cheesy monster destruction and snarky dialogue. Oh, and apparently when you see a monster tearing up the city you are suppose to say “you have to be *#%&ing kidding me!”

I look forward to seeing what other monsters are going to show up in the next issues.

Check out IDW Publishing for Godzilla as well as a lot of other great looking comics.

Let me leave you with some Blue Oyster Cult and Godzilla goodness.