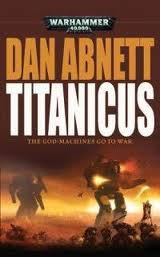 fell pretty quickly onto my to-read list. What made this book stand out for me, though was that it is specifically about the Titans and the Adeptus Mechanicus. So far in my readings these factions are generally in the background and are never really main characters. Occasionally a techpriest will show up for a few pages, but they usually get killed in the incredibly dangerous forty-first millennium. So I was rather excited to finally read a book about the Techpriests and the towering war-machines that are the Titans.

Now for those of you who are unfamiliar with Warhammer 40k, I will explain what the Adeptus Mechanicus and the Titans are for the uninitiated. In the distant future humanity has got all sorts of wonderful technology however much of the understanding of how that technology works has been lost. What little knowledge remains has become a series of mystic rituals and superstitions, the majority of which is controlled by the tech-priests of the Adeptus Mechanicus. The techpriests also believe machinery is better than flesh and regularly augment their bodies with cybernetic implants. What isperhaps most important about the techpriests is that they worship the Machine God instead of the Immortal Emperor. While the Adeptus Mechanicus recognize the Emperor of Mankind as the Omnissiah, a physical avatar of the Machine God, they do not approach worship of the Emperor the same way as other Imperial citizens. This leads to some conflict between the two factions, which is explored in the book.The unique viewpoint of the techpriests was interesting to read and provided a good contrast to the Imperial characters.

As for the Titans, well they are the greatest machines of war the Imperium of Mankind can unleash. If you're familiar with the giant robots for Evangelion or Gundam, it's a close analogy however...the Titans are much larger. The largest of Titans carry battle cathedrals on their backs and carry enough firepower to level a city, but don't discount the smaller Titans. The smallest of Titans are only forty-five tall, but they still pack a heck of a punch. A single Titan is a force to be reckoned with, but an entire Legion is enough to raze a world. The main plot of Titanicus is that the forces of Chaos, with Titans stolen during the Horus Heresy, have attacked the Forge World of Orestes. Because they lack the necessary defenses on-planet to drive off the assault, the leaders of Orestes ask for the Titan Legion Invicta to come to their aid. The resulting war is of epic proportions, but an internal schism threatens to tear the Imperium asunder in the face of the forces of Chaos.

Now there were a lot of things I liked about this book, however I had a couple of problems. Abnett's writing is good, as usual, however there are some problems in specific with this book. It's longer than most of his books, being about six hundred pages instead of about three hundred and I feel like it dragged in the middle. For a long time it built up that there is a difference between the Imperium and the Mechanicus, how they're two different cultures that have reached a fragile symbiosis. While the difference becomes the major plot point in the last third or so of the book, I felt like the middle spent too much time building up to it. I also felt like there were a couple of character that were superfluous. Specifically the toymaker and the former crewmember of a Titan. Yeah, they provide a good way to show the atmosphere of the citizens of Orestes, but their scenes feel too short and disconnected from the larger story to be significant.

Aside from the pacing issues in the middle of the novel, I felt it was a good read overall, especially if you want to read about Titans and the techpriests. Again, if you're not a Warhammer 40k fan this is probably not a good introductory novel and I suggest you go with Dan's Gaunt's Ghosts series, but if you're a 40k veteran and want to learn about Titans this is a great book. I give it an overall rating of three and a half sheep because while it's good at what it does, the pacing issues in the middle bugged me. Anyway, if you're an old hand of Warhammer 40k, you'll definitely want to check this one out.