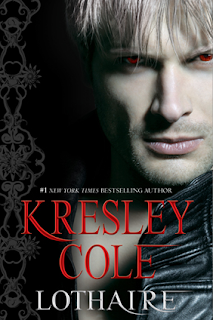 Lothaire, by author Kersley Cole, is the 12th novel in her Immortals After Dark series. Lothaire has been our main bad guy you love to hate since the beginning of the series and I was eagerly awaiting this release date. This book is a magnificent story told with classic Lothaire flare that flaunts his cunning and skill which cements him as the number one bad guy of the series. Turn me to the dark side and let's call it a day!
Plot:
Driven by his insatiable need for revenge, Lothaire, the Lore’s most ruthless vampire, plots to seize the Horde’s crown. But bloodlust and torture have left him on the brink of madness—until he finds Elizabeth Peirce, the key to his victory. He captures the unique young mortal, intending to offer up her very soul in exchange for power, yet Elizabeth soothes his tormented mind and awakens within him emotions Lothaire believed he could no longer experience.
Who doesn't love a guy that's surrounded by cops, under heavy gunfire, with his back to them no less, while holding a tense convo with his fated Bride. And here's the kicker: as bullets rain into his back he hisses over his shoulder... "One-moment!" LOL! This badass immortal beast is faaaar beyond an alpha, so much so that I don't think there's an ego level that could really ever convey the depths of his high-handed all-mighty attitude. BUT, somehow his personality works. When you're this far into the series fans have grown to love/hate this guy. He's just so utterly bad it's sexy as all get out! Plus he's got a body that the gods would kill for and incredibly lethal strength. *sigh* Now of course he's a fictional character so it's all "haha's" and "let's see what Loathire will do now", but in real life if a man EVER treated me as he treats others (like possessions) I'd burn has vampire butt to a crisp.
A deep concern for me was who in the world would ever be the right match for this vampire? As the 'Enemy of Old' this guy's got major emotional and mental issues, not to mention enemies galore coming out of the wood-work. So who in there right mind could ever fall for him? Hillbilly Elizabeth sets up to the plate and knocks it out of the park for a grand slam. She's all sass and mountain fun but don't think she ain't tough; the gal can hold her own against one of the strongest creatures in the Lore. Elizabeth takes knock down after knock down just to get back up and fight again. Despite being, thrown in jail, cruelly treated and mortal with no mystical powers she uses her cunning mind to best those around her time and time again, but how she ever put up with Lothaire's koo-koo crazy is beyond me.
Parts of the latest story get pretty fierce but anything less would have taken the bad out of Lotharie's ass. (And man, is that a sweet ass.) He's meant to be a gritty, take no prisoners, selfish kind of bastard and he meets those expectations time and time again in the book. With some of the best one liners Lothaire is belly-busting funny! An excellent read from start to finish with some smutty romance that's got be illegal in at least 3 States. Over all Lothaire is extremely well written and vividly depicted yet again showing why Cole is one of the best PNR authors on the shelf. Previous characters come back into play and new characters begin to stand out...sounds like more books to me!
My one and only downside to this review was the price tag for the Hard Cover book. It's not out in paperback atm so for those who have yet to get a Kindle or anything to the like this ended up costing me about $27. Pretty hefty for a roughly 400 page story. (Without sexy illustration pictures inside!) I paid it this time but I won't in the future, next time around I'll suck it up and wait for the paperback or borrow someone else's.
If you haven't guessed by now what the ending of this new chapter could possibly be then you'll be VERY surprised.
Getting 4 and 1/2 'make me your personal pet' Sheep
KD