Can you guess Patrica's theme music? 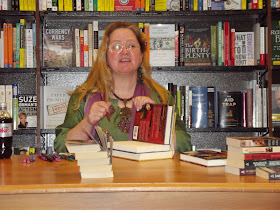 By: Sharon Stogner
Co-Creator & Media Relations
On March 15 Patricia Briggs did a signing at Barnes & Noble in Charlotte, NC. Lucky for me it is only a 90 minute drive. I don’t know much about Briggs since Fair Game was her first book I've read (I will be rectifying this mistake as soon as possible by the way). There were only about 20 of us there, which meant we had time to play around after the signing. Fortunately what happens in B&N, stays in B&N ;) Patty is such a warm and funny person and she likes to talk…a lot <G>. She talked about the Mercy Thompson series, the Alpha &Omega universe and upcoming projects. Since everyone else asked all the basic stuff I threw in some of our fun interview questions from here on the blog. Rather than transcribe the whole talk (I did mention she liked to talk, right?) I will just post the highlights of what she said: 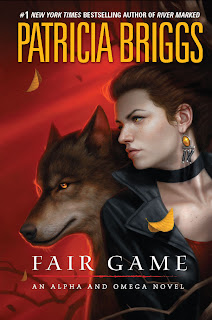 A Bram Book: Bran is not in a happy place right now and Briggs likes people to walk away from her books with a good feeling, and unless Bran takes a left turn at Albuquerque we won’t be seeing his book. But a short story is another matter. She is working on some short stories in the Mercy Universe. Especially Warren (do I have this right?). She said he isn’t bothered by killing people at all and Mercy doesn’t know this.
I asked if we would see more of Alistair, the powerful Fae from Fair Game (cause I have a thing for Fae). She is contracted for 4 books. Three in the Mercy series and one in the A&O universe. There are so many characters she wants to give a book too and since Charles and Ann are in a happy place right now (happy people don’t make good books) she will leave them alone for a while. She also mentions that Fair Game is a great starting point for people and Mercy fans need to read it because the twist at the end of Fair Game changes things in the Mercy universe too. 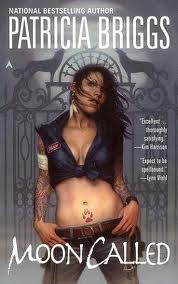 Jesse: Adam doesn’t want her to be a werewolf or part of their world because he doesn’t like being one, but Jesse might feel differently. Which means conflict (she smiles here). She doesn’t know exactly what will happen, but Jesse’s future will be adventurous.
How did she pick Mercy’s career: in 2005 Patty was asked to write an Urban Fantasy with a heroine connected to the supernatural world and she should have a complicated love life with a vamp or werewolf. At the time it UF with vamps and werewolves was still new. She picked weres because at the time vamps were popular. Then she decided the heroine had to be underpowered so she could have conflict. Her reasoning was…I am from Montana…underpowered…coyote…coyotes are popular in Native American myths so Mercy should be N.A. too. As far as a job for Mercy, she wanted it to be something she knew about and since bagel bagger didn’t sound so great she went with mechanic. She and her husband owned VWs and were always fixing them on their own. (By the way, she says NEVER get a EuroVan) There was a mechanic in their Montana town, Buck, that sold them parts at cost and told them how to fix their cars when they couldn’t afford to have him do it. He became Zee in her Mercy books.
Other favorite authors: She told Jim Butcher that he almost ruined her marriage because her husband likes his books better than hers. She doesn’t know why Lynn Viehl isn’t a NY Times bestselling author. She loves her books. She mentioned Meljean Brook's steampunk series, Ann Bishop and Ilona Andrews as well as lots more. 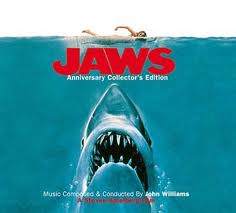 I asked her what theme music she would like playing whenever she entered a room. She picked the theme to Jaws <G>
Memorial Day weekend she will be attending the only Con in Montana and George R.R. Martin will be there.
Last year was the single most disastrous year she has ever had. She and her husband spent 9 months in her 30 X 10 foot writing trailer along with the dog, 4 cats, 2 snakes, and a bird (this is why there is only one book this year) They were having an addition put on the house that was to take two weeks. But they found black mold, and had to take the roof off and replace. Everything had to be taken out and stored in the front yard in moving containers.
The Mercy books are kind of a microcosm of the werewolf world. They are in a small town and events that take place don’t have an impact on the rest of the world. The Alpha & Omega series is where the big things happen that affect the werewolf world. Charles is the enforcer for Bran and is in contact with all the packs. A&O was where Briggs wanted to tell the backstory of how the werewolves came out to humans. She also wanted to write a serial killer novel set in Boston. The twist at the end of Fair Game was something she wanted to happen in the Mercy universe and this turned out to be the perfect place for it. 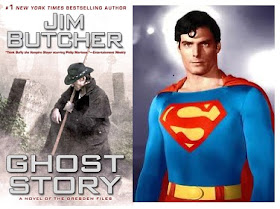 I also asked her what fictional character she would like to have her back during the zombie apocalypse. She said Superman or Harry Dresden.
That was the gist of the Q&A, she signed all the books you wanted her too and spent lots of time talking with each person and taking pictures. A small group of us stayed a while after to chat. Including author Tess Hilaire (Deliver Me From Darkness) and fellow blogger Ana from HerdingCats, Burning Soup. I tried to capture Patty so I could give her away on the blog, but she got away….
Sharon Stogner at 7:00 AM
Share