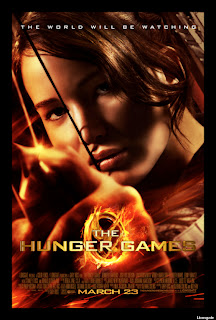 ***Warning this review is filled with spoilers***

The Hunger Games, directed by Gary Ross, stars Jennifer Lawrence, Josh Hutcherson, Liam Hemsworth (Yup, Thor's brother!), Elizabeth Banks, Woody Harrelson and Lenny Kravitz. This is definitely not a feel good movie you watch on a lazy weekend; no, this is an emotionally wrecking film where children hunt down and slaughter each other on live TV. Yet from this brutality rises our heroine Katniss, the gal who won't go down for the thrills of a society littered with corruption.

Plot:
Every year in the ruins of what was once North America, the evil Capitol of the nation of Panem forces each of its twelve districts to send a teenage boy and girl to compete in the Hunger Games. A twisted punishment for a past uprising and an ongoing government intimidation tactic, The Hunger Games are a nationally televised event in which "Tributes" must fight with one another until one survivor remains. Pitted against highly-trained Tributes who have prepared for these Games their entire lives, Katniss is forced to rely upon her sharp instincts as well as the mentorship of drunken former victor Haymitch Abernathy. If she's ever to return home to District 12, Katniss must make impossible choices in the arena that weigh survival against humanity and life against love.

First and foremost let me say that I did not read these books so this review is coming from a strictly movie-only perspective. That being said here's some of the things I liked: Liam Hemsworth, need I say more? The costumes throughout this film are outrageous and over the top, yet at the same time they are somehow incredible and completely consuming. The hair, mustaches and yellow eyeliner were amazing. The story itself is one that is absolutely emotion-packed from the top, down to the tiniest parts of its core and for that alone I have to give this one a major bow for taking me on one heck of a ride! Jennifer Lawrence knocked this one out the park with her stellar performance! Truly an amazing actress whose performance alone had me buying into the movie's story.

On the downside, shaky camera syndrome is a plague on modern films and should be banned from most in my opinion! It's extremely frustrating to be deeply involved in a story and suddenly have the whole perspective thrashing about so forcefully that you have no idea who just killed who. At least give us barf bags under the seat! Our lead male, "Peeta bread" as I'm calling him, was a total pansy. He turns on the woman he confesses to loving for a long time right after the game gets going. I get that it's a savage game to the death and maybe he was playing nice with the other kids just to get by, but there are always choices other than teaming up with the nasties. Aside from his traitorous heart, he comes across as such a total wimp that Katniss has to keep safe all the time. Yet another reason why Thor's brother was clearly the better choice here.

With a PG-13 rating I was blown away with the amount of savagery and knife-oriented gore. A movie like this and have to wonder just how far we've come in the film industry that an action blood bath extravaganza can pass with a lower rating just to get more butts in the seats. It boggles the mind!

The overall storyline is given to the audience in gradual doses, but by the end I was still lost, so the rest I had to call and ask Sharon about. (Since she read the books) Maybe it's assumed that just about everyone has read these books, but more info on the past of characters' and the overall plot would have done a lot of good here. It wasn't very clear how the games came to be or why so many districts are so poor. There also were some major mother-daughter issues going on between Katniss and her mother, but no real dialog between the two explaining why. The biggest flaw for me was why on earth would anyone let their kids be put into this game in the first place?! I mean come on, you all outnumber the guys with the guns! Yeah some might die, but think of the greater good here people!

So for the folks that want to watch a heart-wrenching story that's filled with corruption, nail biting action, kids killing kids, murder and hallucinating bees then check out the punch-in-the-gut The Hunger Games. It will leave you both loving and hating it at the same time.

Getting 3 and 1/2 tree climbing Sheep
KD