Today we have Erin Kellison hanging with the flock. Her second novella, Shadow Play, in her spin-off series recently released! The first novella, Shadow Touch, was my introduction to Erin's writing and I have been a fangirl of her writing ever since. Her tech savvy husband made an interactive website based on her Shadow novels for fans to play at. So after you check out the interview, enter to win the whole set of Shadow novels, and buy her novellas...head over and check out the Segue Institute! 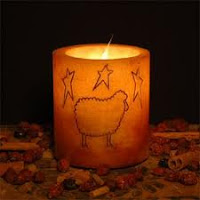 Sharon: *lights candles* Hello, have a seat and help yourself to some Moonpies and Kool-Aid. Sorry we don’t have any lights, but Katie stuffed the very last of our money into the pants of a previous guest instead of paying the electric bill! But you got to admit, the shadows cast by the candles adds to the mood.
Katie: *pulls out violin*
Erin: I happen to love shadows! And… yum!

Sharon: Today we are going to talk about your Shadow Touch novella series, which is a spinoff of your fabulous Shadow series. Can you tell the poor unfortunate souls who don’t know the Shadow series a little about it?
Erin: My Shadow series is contemporary dark fantasy with a twisted take on fairy tale and comprises three books: Shadow Bound, Shadow Fall, and Shadowman. I’ll be giving away a set of them today. Shadow in my world is synonymous with magic, and it’s seeping into modern life from a place I call Twilight, a realm between earth and the hereafter. The fae live there and they want nothing more than to cross into our domain.

Katie: Did you just mention Twilight??? *perks up straighter* Are we talking about sparkly vamps Twilight?
Erin: Alas, I have neither vampires, nor sparkly-skinned people. (Although, once upon a time, before publication my first book, Shadow Bound, was titled Touch of Twilight. Still no relation to the Cullens.)

Katie: How many smexy heroes do we have in the Shadow Touch Novella series?
Erin: We have… ONE! Dr. Cameron Kalamos (picture Ian Somerhalder) 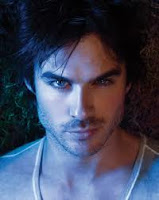 *everyone, a moment of silence while we picture Ian...le sigh*.
He’s a scientist, likes his quiet research into Shadow and the fae, but when Eleanor Russo comes to him for help, both his intellect and his passions are aroused. See, Ellie’s got a unique problem: To her constant humiliation, her shadow is able to move, speak, and act on its own. Her shadow is the naked embodiment of her id and is motivated by instinct and curiosity, and thus stirs up a whole lot of trouble. Ellie’s situation forces Cam out of the lab and into life and death situations he could never have anticipated. I settled on a thinking man—someone who used to be content to work in the lab, but is called upon to do great things.

Sharon: I have read and reviewed the first novella Shadow Touch and it was my introduction to Erin’s writing. I have been a fan ever since! Katie, if you want lots of smexy man candy, you can read the Shadow Series.
Katie: Now, how could I ever say no to that?
Erin: Katie, send me your email and e-format of choice, and I’m happy to send them to you.

Sharon: What brought about the creation of the Shadow Touch novella series? Why did you decide to do novellas instead of novels for this series?
Erin: Ellie and Cam were actually intended for a book. I loved the idea of a disembodied shadow that said whatever she wanted to without reference to whether it was socially correct or not. I loved that the shadow would not be shy about her sexual interests, and I was gleefully excited to explore what would happen when Ellie (and her shadow) were forced to fight for what was important to her. And I loved the dynamic I had envisioned between her and Cam. This would have been the third novel in my Shadow series, but I abandoned it in favor of Shadowman. I wanted to do a novella in between releases, and I used Ellie and Cam for what became Shadow Touch. But as soon as I finished, I knew I wanted to continue with their story—I had so much more that I wanted to do with them. Luckily, my publisher was behind me, and they agreed to three more installments, for a total of four, to complete Ellie and Cam’s arc.
Sharon: Actually that is a win-win for everyone. You get to write their story and we get something to read while waiting for your novels to come out.
(Heaven forbid if Katie’s shadow ever got out!)
Erin: *snort* Mine would be pretty bad too.

Sharon: The second novella, Shadow Play, is a continuation of Shadow Touch. Should people read the first novella before Shadow Play?
Erin: I’m writing each as a stand-alone adventure, so readers should be able to start anywhere. But to get the complete evolution of Ellie and Cam’s romance, I’d recommend starting at the beginning, when he has her thrown in a prison cell reserved for monsters.
Katie: Growing up what stories did you read? Did they help bring you into this writing world?
Erin: I read everything! I don’t remember much before sixth grade, except the Narnia series. But I can remember reading Judy Blume and Lois Duncan and Joan Aiken. When I was about twelve I asked my mom about Jane Eyre and she told me that it was too hard for me. Which ticked me off so much that J.E. was the very next book I read, even though it took me about five months to complete. I loved the classic gothic romances. I loved Tolkien. I loved Anne McCaffrey. I gobbled books. Still gobble them.
Sharon: *discretely moves my TBR pile away from the book gobbler*

Sharon: How many novellas will there be in the Shadow Touch series and will they all be about Cam and Ellie or will there be other people’s stories to tell?
Erin: There are officially four novellas in the Shadow Touch series: Shadow Touch (out now), Shadow Play (April 24), Shadow Hunt (Dec 2012), and Shadow ?? (2013). They are all about Ellie and Cam, each story furthering their romantic and character arcs. They also bridge the parallel worlds of my Shadow series and my soon to be released Shadow Kissed series (Fire Kissed, July 1!) so readers get a tiny intro into both. Hopefully, they will want to read more.
Sharon: Now that we have the business end of this interview done, let’s talk about some uncomfortably personal things like what you do behind closed doors…
Erin: Ummmm…..
Katie: *evil laugh*
Sharon: Hey, get your minds out of the gutter people! I just wanted to know what flavor toothpaste do you use?
Erin: Oh… mint.

Katie: If you could go away for a romantic weekend with anyone, fictional or not from past or present, who would it be and why?
Erin: It’d have to be my sweet husband—he’s sane to my crazy, a rock to my storm, and he has all the right moves. ;)
Sharon: awww, and now that he isn’t in the room anymore? Care to change your answer? <G>
Erin: Nah… I’d still take him. I’m in lerve.

Sharon: If every time you walked into a room theme music/song would play, what would yours be?
Erin: She’s a maniac… maniac… (kidding. No idea.)
Sharon: going to go with option one unless you come up with something else! <G>
Katie: And she's dancing like she's never danced before!

Katie: what’s a tv show you're addicted to right now?
Erin: Game of Thrones and Castle are my faves
Katie: For real! Season 2 of Thrones is really building up all the players that are going for the Throne. And Castle now has Worf on it!!
Erin: I’m actually watching Game of Thrones right now.

Sharon: What is something you consider beautiful in: Art, music, dance, nature and you.
Erin: Art: My kids’ efforts to draw anything. Music: My husband plays the guitar and has written me some amazing songs. Dance: I used to be pretty serious about ballet and still think it is exquisite. Nature: Spring. Moi: I’m at my best (most goofy, most creative, most happy) with my family.

Sharon: Where/when do most your best ideas come to you? Car? Shower? While eating Fruit Loops?
Erin: Alas, the best ideas come to me when I am working out, which I hate (loathe, despise) to do.
Sharon: lol, what kind of work out do you do that inspires so much disdain?
Erin: The dreaded elliptical machine. It’s a torture device.

And now some Rapid Fire questions!

Katie: Snow bunny or Beach bum?
Erin: Bum
Sharon: I prefer tight bums…oh, wait, you were referring to something else <G>
Katie: No, no. Let's refer to that.
Erin: LOL

Sharon: mountain forest or Tropical Island?
Erin: Both
Sharon: *shoots irritated look at Erin* cheater!
Erin: Okay, fine. Mountain forest. After a while I’d feel too isolated on an island.

Katie: Sexy superhero or twisted villain?
Erin: Superhero!
Sharon: got a favorite? I like Thor.
Katie: *head desk* Just wait till she brings up Prime.
Erin: Thor is mighty nice, but only if he has his shirt off.
Sharon: well, if you insist... 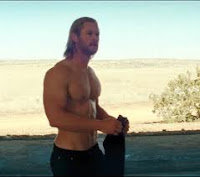 Katie: Thank you for taking the time to chat with us, would you like to add anything before we wrap?
Erin: Thanks so much for having me! This was a blast. Stop by my website for more info on my upcoming releases, and to read excerpts from all the books in my Shadow series. You can also find me on Twitter and Facebook – links are below:
My website:
www.erinkellison.com
Twitter (@ekellison):
www.twitter.com/ekellison
Facebook:
www.facebook.com/erinkellisonauthor

Amazon link to all Erin's Shadow books
Sharon Stogner at 12:05 AM
Share