Penguin has some awesome Urban Fantasy
coming out.
2 winners can pick 2 books (US/Canada only) 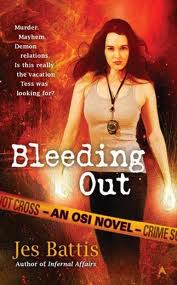 Bleeding Out (OSI #5)
by Jes Battis
Mass Market Paperback: 256 pages
Publisher: Ace (May 29, 2012)
ISBN-10: 1937007634
ISBN-13: 978-1937007638
From the author of Infernal Affairs comes a story of murder. mayhem, and demon relations. Is this really the vacation Tess was looking for?
Though she’s on leave from the Occult Special Investigations squad, Tess Corday is still grappling with her own personal mysteries. But finding out the truth about her demonic heritage has been more difficult than she expected. Plus, her unauthorized investigation into an addictive new vampire street drug is driving a stake between her and her undead boyfriend.
Then Vancouver’s premier necromancer turns up dead. Tess suspects that the cases are related. And her suspicions will lead her into a paranormal showdown that can—and will—change the course of her life forever.
Occult Special Investigations series
1. Night Child (2008)
2. A Flash of Hex (2009)
3. Inhuman Resources (2010)
4. Infernal Affairs (2011)
5. Bleeding Out (2012) 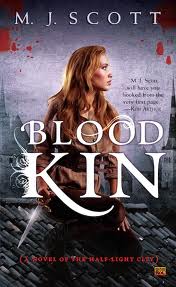 Blood Kin: A Novel of the Half-Light City #2
By M.J. Scott
Mass Market Paperback: 336 pages
Publisher: Roc (June 5, 2012)
ISBN-10: 0451464583
ISBN-13: 978-0451464583
Imagine a city divided. A city where human and Fae magic rests uneasily next to the vampire Blood and the shapeshifting Beasts. A city where a fragile peace is brokered by a treaty that set the laws for all four races… a treaty that is faltering day by day.
I didn’t plan on becoming a thief and a spy. But options are limited for the half-breed daughter of a Fae lord. My father abandoned me but at least I inherited some of his magic, and my skills with charms and glamours mean that few are as good at uncovering secrets others wish to hide. Right now the city has many secrets. And those who seek them pay so well…
I never expected to stumble across a Templar Knight in my part of the city. Guy DuCaine is sworn to duty and honor and loyalty — all the things I’m not. I may have aroused more than his suspicion but he belongs to the Order and the human world. So when treachery and violence spill threaten both our kind, learning to trust each other might be the only thing that saves us.
But even if a spy and a holy knight can work together, finding the key to peace is never going to be easy…
Novel of the Half-Light City Series
1. Shadow Kin
2. Blood Kin 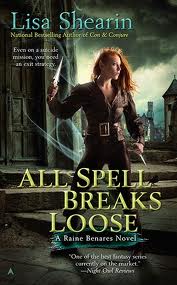 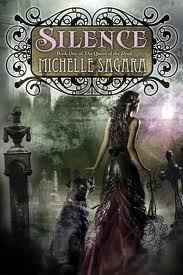 Silence (The Queen of the Dead book #1)
By Michelle Sagara
Hardcover: 256 pages
Publisher: DAW Hardcover; 1 edition
(May 1, 2012)
ISBN-10: 0756407427
ISBN-13: 978-0756407421
It began in the graveyard…
Ever since her boyfriend Nathan had died in a tragic accident, Emma had been coming to the graveyard at night. During the day she went through the motions at her prep school, in class, with her friends, but that’s all it was. For Emma, life had stopped with Nathan’s death. But tonight was different. Tonight Emma and her dog were not alone in the cemetery. There were two others there--Eric, who had just started at her school, and an ancient woman who looked as though she were made of rags. And when they saw Emma there, the old woman reached out to her with a grip as chilling as death...
Emma was not quite like others teenagers. It was true that other girls had experienced grief. Other girls had also lost their fathers, or had their boyfriends die in a senseless accident. But though she hadn’t known it till that night in the graveyard, unlike those other girls, she could see, touch, and speak with the dead. In fact, Emma could draw upon the essence of the dead to work magic. That was what Necromancers did. But Emma had no desire to be a Necromancer. She just wanted to help the ghosts who walked the streets of Toronto, unable to escape from the land of the living. And that was just as well, because had she chosen the path of the Necromancer, Eric would have had to kill her.
Instead, Eric and his fellow Necromancer hunter Chase found themselves violating every rule they were sworn to follow, becoming part of Emma’s group, helping her to stand against those who preyed upon the dead. But whether Emma and her friends could survive such a battle was anyone’s guess. And whether Emma could learn to use the magic of the dead against her enemies without herself falling victim to the lure of such power remained to be seen. Eric seemed to think she could, and her living friends would never abandon her. But only time would tell what Emma’s true destiny was... 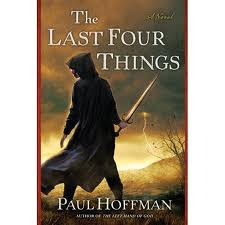 The Last Four Things (The Last Hand of God #2)
By Paul Hoffman
Hardcover: 384 pages
Publisher: Dutton Adult; First Edition edition (June 5, 2011)
Language: English
ISBN-10: 0525952187
ISBN-13: 978-0525952183
The epic story of Thomas Cale-introduced so memorably in The Left Hand of God--continues as the Redeemers use his prodigious gifts to further their sacred goal: the extinction of humankind and the end of the world.
To the warrior-monks known as the Redeemers, who rule over massive armies of child slaves, "the last four things" represent the culmination of a faithful life. Death. Judgement. Heaven. Hell. The last four things represent eternal bliss-or endless destruction, permanent chaos, and infinite pain.
Perhaps nowhere are the competing ideas of heaven and hell exhibited more clearly than in the dark and tormented soul of Thomas Cale. Betrayed by his beloved but still marked by a child's innocence, possessed of a remarkable aptitude for violence but capable of extreme tenderness, Cale will lead the Redeemers into a battle for nothing less than the fate of the human race. And though his broken heart foretells the bloody trail he will leave in pursuit of a personal peace he can never achieve, a glimmer of hope remains. The question even Cale can't answer: When it comes time to decide the fate of the world, to ensure the extermination of humankind or spare it, what will he choose? To express God's will on the edge of his sword, or to forgive his fellow man-and himself?
The last Hand of God Series
1. The Last Hand of God
2. The Last Four Things 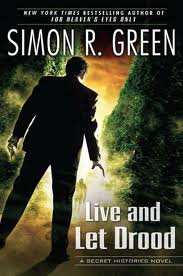 Live and Let Drood: A Secret Histories Novel #6
By Simon R. Green
Hardcover: 368 pages
Publisher: Roc Hardcover (June 5, 2012)
ISBN-10: 0451464524
ISBN-13: 978-0451464521
The name is Bond, Shaman Bond. Better known as Drood, Eddie Drood Yes, I’m one of those Droods—the family who’ve been keeping the forces of evil contained in the shadows for as long as humans have walked the earth. Recently, I suffered a slight case of death, but thanks to Molly, my best girl (who happens to be a powerful witch), I got over that right quick. Unfortunately, my family wasn’t so lucky. In my absence, Drood Hall was destroyed and all my relatives were killed. Which left me as the Last of the Droods. I didn’t much like being The Last Drood, I can tell you—and then I realized that things weren’t as they seemed. Someone had activated a dimensional engine, sending my Drood Hall off to an alternate Earth, replacing it with a burnt-out doppelganger. My family is still alive out there. Somewhere. And nothing’s going to stop me from finding them…
Secret Histories
1. The Man With The Golden Torc (2007)
2. Daemons Are Forever (2008)
3. The Spy Who Haunted Me (2009)
4. From Hell with Love (2010)
5. For Heaven's Eyes Only (2011)
6. Live and Let Drood (2012)
Enter the Rafflecopter, 2 winners will be chosen to pick 2 books each
US/Canada only
a Rafflecopter giveaway