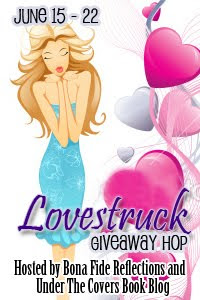 I Smell Sheep is proud to take part in the 2012 Lovestruck Giveaway hop hosted by Under the Covers Book Blog and Bona Fide Reflections!

The point of this tour is to "carry away" readers with a (hopefully) new series or character. We decided to pick a series from NYT Best Selling Paranormal/Romance author Nalini Singh AND we will be giving away a great starter book for those that want to dive right in! Angels' Flight released March 2012 contains a compilation of novellas from her amazing Guild Hunter Saga. Here's a look at what's inside:

In Angel's Wolf a vampire becomes fascinated with the seductive angel who rules Louisiana. But all is not what it appears to be in her court.
In Angels' Judgment a hunter must track one of her own gone bad, while surviving the deadly tests placed in her way by the archangels themselves. Unexpected backup comes from a stranger who might just be the most lethal threat of all...
Plus FIRST TIME IN PRINT
In Angels' Pawn a vampire hunter faces off against two rival factions and the angel manipulating them both, and a vampire whose help is not entirely selfless...
And NEVER BEFORE PUBLISHED
In Angels' Dance an angel trapped in the mountain stronghold of the Refuge finds herself under siege by a warrior angel from a martial court. 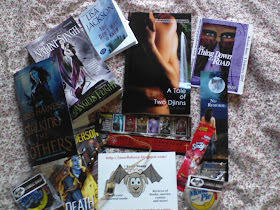 Make sure to fill out the Rafflecoptor thingy below and you're all set! Contest ends June 23rd at 12:01am. Good Luck and happy reading!
Katie Dalton at 12:00 AM
Share