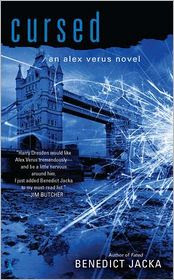 Since his second sight made him infamous for defeating powerful dark mages, Alex has been keeping his head down. But now he's discovered the resurgence of a forbidden ritual. Someone is harvesting the life-force of magical creatures—destroying them in the process. And draining humans is next on the agenda. Hired to investigate, Alex realizes that not everyone on the Council wants him delving any deeper. Struggling to distinguish ally from enemy, he finds himself the target of those who would risk their own sanity for power...

Alex is a diviner, he has the ability to see different futures and what different outcomes can occur by going down certain paths. He will know which path will lead him to death and which ones will let him live another day. One of the “side effects” of this is that Alex can also see how he will die if he goes down the “wrong path”. Being a diviner does not fall under one of the more “serious or flashy” mage abilities, since there is no brute strength behind being a diviner, and most members of the council look down on Alex for this. But as much as they disdain him, these same members will hire Alex out when they fear there may be some sort of trap set up to kill them.


Along with running a magic shop, Alex has an associate named Luna. Luna is not a mage, she doesn’t have any type of magic abilities at all, instead she is living with a curse that Alex is determined to break. Alex is called in to help out a Council member with the tracking and killing of a barghest (a shape shifter that can take the form of either a human or a great wolf like dog), but to the surprise of the group the barghest is already dead. This raises a few eyebrows in the team; there are no real signs of a fight or struggle, just a dead barghest.

Alex doesn’t know what to make of this, but later on finds out that someone is and had been trying to use a banned ritual that takes the magic from magical creatures and transfers into humans, as a sort of “power booster” to their own magic. Since the numbers of magical creatures are running low, the people behind this are starting to target humans as the next form of magic batteries. Alex depends on the help from an ally and a few so-called allies (depends on what the situation is), to save Luna and another friend from being killed.

You don’t really need to read Fated before Cursed, but I highly recommend checking out Fated first, since there are a few things that are explained in better detail, and who certain people are that are in the story and are a part of Alex’s life. I am already eagerly awaiting the third book in the series, Taken, which is due out in September.

If you enjoy reading the Harry Dresden series from Jim Butcher, I suggest you check out this series from Benedict Jacka, since there are a few similarities between Alex and Harry.


If you want to know more about the background and settings of the Alex Versus world there is a link to the Encyclopedia Arcana http://benedictjacka.co.uk/encyclopaedia/
Sharon Stogner at 12:10 AM
Share