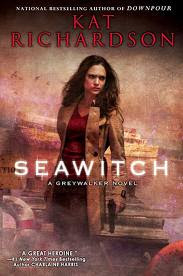 A quarter century ago, the Seawitch cruised away from her dock and disappeared with everyone on board. Now, the boat has mysteriously returned to her old berth in Seattle and the insurance company has hired Harper to find out what happened. But Harper is not the only one investigating. Seattle Police Detective Rey Solis is a good cop, albeit one who isn’t comfortable with the creepy cases that always seem to end up in Harper’s lap. As Solis focuses on the possible murder of a passenger’s wife, Harper’s investigation leads her to a powerful being who may be responsible for the disappearance of the Seawitch’s passengers and crew.

Seawitch is book seven in the Greywalker series. All the books in this series can be read as stand-alone novels, but I suggest you start with book one, Greywalker. The Grey is a fascinating place and best explored as Harper discovers it, plus this book contains some spoilers for the previous books.

Who doesn't love ghost ships? The Seawitch shows up after missing for twenty seven years. Harper is hired by an insurance company to investigate the mysterious reappearance, but it is the Grey that forces the issue. There are trapped souls in the Seawitch, an actual seawitch, merfolk and dobhar-chu’ all mixed up in a complex mystery leaving you wondering who is innocent, helpful, or just evil.

Harper is still struggling with the need to take care of things herself in order to protect those around her, but she has met her match in the stoic Detective Rey Solis. Solis has run into Harper and her weird cases before, but this time he requests to be on the case of the Seawitch so he can work with Harper. He is promoted to a main character status in this book and I hope this means he will have a larger role in future ones.

There is a new story arc introduced in this book and I like where it is headed. There have been hints about Quinton’s past and we finally get more information in the latest installment. His father shows up and wants him to be part of a secret government project that will put the hidden world of supernatural creatures, The Grey, and Harper on the defensive and I can’t wait to see how they fight back.

There isn’t a lot of action in this book until the very end. However, there is a solid mystery and I love the mixing of maritime myths with the author’s creative additions. I will never look at otters the same way again <G>. And as always, I enjoyed the vivid (I use this term a lot when reviewing Greywalker books) descriptions of magic. A lot of time is spent telling the reader about boats and life on the water. I did learn a lot, but this aspect made it easy to set the book down at times so I wouldn't say it was one of my favorite of the series, but worth the read for fans. And yes, Chaos makes her presence known and Richardson has come up with more amusing metaphors for the little creature.

Love how Harper tries to explain what she does to Solis
“I … sometimes have little disagreements with … um, with reality. And physics.”