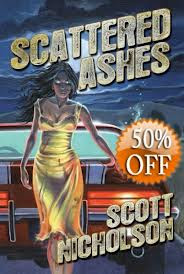 A collection of Scott Nicholson's best short stories from 2001 to 2008, including three original new works and an afterword.
Exclusive introduction by Jonathan Maberry
Art by M. Wayne Miller

Little rant on why you should read horror
I have always been a fan of the horror genre and I know what some of you are thinking…”yuck! Gross! I don’t like horror!” Somewhere along the line the horror genre got a bad rap because of all those slasher movies like Saw or Hostel. The horror I grew up with, which still exists by the way, wasn't about the gore. Not to say there wasn't gore sometimes, but it was about watching people just like you and me doing disturbing things in response to extraordinary situations. The horror aspect comes when you realize that, given those same conditions, you might do terrible things too. It is about watching others find that dark place and realizing you have one too, as well as understanding the “monster” and sympathizing with it. Scott Nicholson can write good old-fashioned horror in the form of a traditional ghost story or an urban legend, and he does that in Scattered Ashes, a collection of thought-provoking, spine-tingling short stories that remind me of the Twilight Zone or Tales from the Crypt.

Review
I enjoyed every one of these stories and wish I could tell you about all of them! But that would take a while so here are a few of my favorites.

The Meek. This story is about zombie Sheep…enough said!

“The herd was closer now, stampeding into Wadanetta, a hundred haunted bahs bleating from bottomless mouths.”

Dog Person was probably the most moving of all the stories. The ending isn’t what you expect, but then again it is. Sorry for being so vague, but I don’t want to spoil.

Murdermouth is a zombie tale from the POV of the zombie.

Last Writes is a clever ghost story set in a lighthouse and stars a well-known historical horror writer.

The Weight of Silence is a murder story with a twist at the end you don’t see coming.

Silver Run will remind you of the train engineer ghost story everyone heard growing up and what happens to ghosts when the world moves on.

Another thing I really enjoyed was the section at the end where Scott talks about the inspiration of each short story. Nice little touch that creates a connection with the author. And I just got to say, the cover ROCKS! It depicts the first story Timing Chains of the Heart.

Scott is a master storyteller and with the ability to put those words on paper. I haven’t read a Scott Nicholson story I didn’t like yet. Might be time for you to give horror a chance.

Nicholson has written hundreds of songs and poems and was a musician in a former life. a newspaper reporter, he won three North Carolina Press Association awards. He's had the usual collection of odd jobs: dishwasher, carpenter, painter, paranormal investigator, baseball card dealer, and radio announcer. Now he haphazardly trades words for magic beans and uses "haphazardly" as often as possible while decrying the overuse of adverbs.

Entering the digital era with a vengeance, Nicholson is releasing orginal titles and collections while conspiring to release interactive books in the near future, building audio files, video, and collaborative fiction projects. He also launched eBookSwag to embrace the future of free ebooks.

Nicholson won the grand prize in the international Writers of the Future contest in 1999. That same year, he was first runner-up for the Darrell Award. He studied Creative Writing at Appalachian State University and UNC-Chapel Hill. He has been an officer of Mystery Writers of America and Horror Writers Association and is a member of International Thriller Writers and inaugural member of the Killer Thriller Band.

Unfortunately, they never taught him to write: he had 105 rejections before his first story sale and over 400 before he sold a novel. He hasn't learned much from his mistakes but thinks he'll probably improve with practice. If nothing else, he's become a better liar.