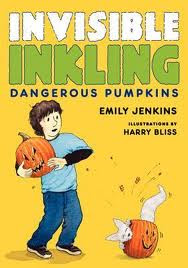 It's Halloween. Fourth grader Hank Wolowitz hates Halloween. Every year his older sister, Nadia, scares him half to death.
This year might be different, though. After all, Hank's the only kid in Brookly, probably the only kid in North America, with an invisible bandapat living in his laundry basket. And Invisible Inkling loves Halloween. Pumpkins are his favorite food.
But Hank has serious trouble stopping Inkling from devouring every jack-o'-lantern in their neighborhood. And that's not his only problem: Will he figure out a cool costume? Will he survive the small army of ballerinas roaming the hallways of his building? Will Hank ever get revenge on Nadia?
Inkling has long since stopped listening to Hank's worries.
Inkling is taking action.

I have a middle school child, but I really never cared about the books aimed at this age group until recently. Fortunately, I have had the opportunity to review these types of books and the more I read, the more surprised I am at the quality of this genre. Invisible Inkling is about a 4th grade boy named Hank, and life has been getting him down lately. His best friend moved away, his 16 year old sister Nadia has been mean to him, and his parents, who own an ice cream shop, always use his sister’s ideas for the special Halloween flavor. Her ideas are boring, unlike his idea for Loose Tooth ice cream and Mummy's Toe Nails. On top of that Nadia, always scares him on Halloween. Thank goodness he met Inkling. Inkling is a pandabat from the Peruvian Woods of Mystery and he is invisible. Problem is he likes to act out and Hank gets blamed for everything Inkling does.

This story really took me by surprise. It is written from Hank’s POV, who has a charming and realistic sense of humor for a 4th grader. The family dynamics are believable and I think most readers will be able to relate to the ups and downs of this family's life. There is a lot of humor which your middle graders will love, but there is also a serious theme about dealing with anger and disappointment that is so well integrated into the story your kids won’t even realize it. This book is a wonderful read for kids and parents/teachers.

I highly recommend this book for elementary school libraries and your child’s shelf. 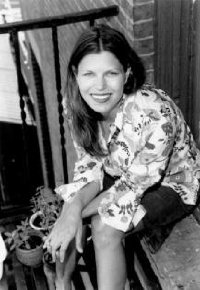 About the Author:
website
I was born in New York City, grew up in Cambridge, MA and Seattle, WA, studied English at Vassar, and then came to New York to get my doctorate in 19th-century English literature at Columbia.

My father is playwright Len Jenkin, and together, he and I wrote a novel for children called The Secret Life of Billie's Uncle Myron (1996). Subsequently, my first picture book, Five Creatures was awarded the Charlotte Zolotow Honor and the Boston Globe/Horn Book Honor.

Forthcoming children's books are listed here, and other picture books currently in stores include Sugar Would Not Eat It, The Little Bit Scary People, What Happens on Wednesdays and Skunkdog. That New Animal received the Boston Globe/Horn Book Honor as well.

I've written articles for a number of magazines and essay collections as well. If you're interested in my work for young adults, visit E. Lockhart.