Ghost was a popular title for Dark Horse that debuted in 1993 and had a ten year run that featured crossovers with Hellboy, X, The Mask, and Barb Wire. Like so many other comics, Ghost is finally getting a reboot. This will be a different take on the character so you don’t need to know anything about the original comics to enjoy this one. 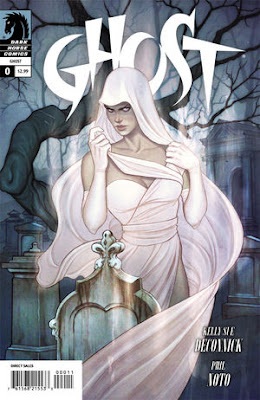 
Preview
Former journalist Vaughn Barnes has been reduced to moonlighting as cameraman for the shoddy paranormal-investigation cable TV show Phantom Finders. But when a curious device summons the specter of a beautiful, translucent woman, Vaughn is plunged into a mystery of criminal intrigue that spans two worlds! Kelly Sue DeConnick and Phil Noto launch their exciting new take on one of Dark Horse’s most popular characters ever! 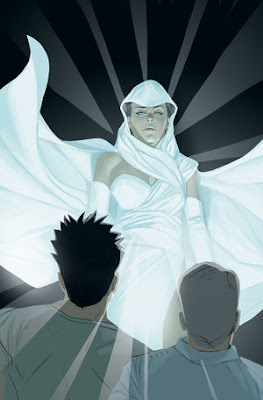 The enigmatic Ghost, along with paranormal investigators Tommy and Vaughn, takes to the streets of Chicago in search of the crystal-powered machine that first conjured her, hoping to find clues to her mysterious past life. But the machine’s original owners have a deadly agenda of their own. Picking up right where Ghost #0 left off, Ghost #1 continues Kelly Sue DeConnick (Captain Marvel) and Phil Noto’s (Angel & Faith) reimagining of Dark Horse’s greatest heroine!
* Variant cover by Alex Ross!

Issue #0
I knew nothing about the previous series when I picked up Issue #0, and I was intrigued immediately with the cover. The ghost woman is beautiful and creepy at the same time. This issue gives the reader the back story of the main players. Vaughn is a down on his luck ex-journalist with an ex-wife. He is working as a camera man for Tommy who has a paranormal reality TV show, a chip on his shoulder, and not a lot of respect. Tommy "obtains" a crystal box that somehow pulls the spirit of a woman into our world. Everything about her is a mystery, and even the ghost isn't sure who she is.

I was a little confused because this issue felt like they snatched little bits from the full story and strung them together. It felt like I was watching those quick previews before a TV show to catch you up on what has happened up to this point, but not an actual episode. I understand that is what it is meant to do, but I had to read through the story a couple of times to understand it. I did decide I liked the characters and the art work. The Ghost (cause we don’t know who she is yet) is a kick ass woman and what’s not to like about that? Some of the panels looked like she was superimposed onto the page as if she wasn’t really part of the original drawing and there were to many panels where the emphasis was on her eyes. I get it, she is creepy.

Issue #1 Again, another great cover, but it doesn't really reflect the appearance of the character in the comic. This issue is narrated by the Ghost for the most part and gives us an idea of what she thinks of her situation. She doesn't know anything about herself, but she does have bits and pieces of information she just knows, like the story of Athena. Ghost feels a connection to Athena's story that she can't explain. In this issue we get to meet the protagonist…not a nice guy. Don’t want to spoil. The Ghost is in a corporeal form for most of this issue as opposed to her scantily draped ghost form. I like the direction the story is taking and looking forward to the next installment.