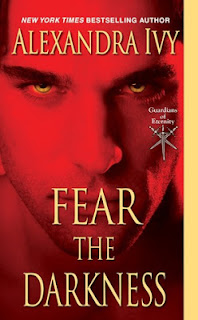 Fear the Darkness, by PNR author Alexandra Ivy, is the ninth edition in the Guardians of Eternity saga. I first fell in love with this saga back when Styx and Darcy (book 3) burned up the pages with a powerful dynamic. As the saga has continued it's become bogged down with a lot of the same repetitive plot scenarios, if not for the character interaction and relationship drama I would have left this series long ago.

Plot:
Beautiful Cassandra is a Were, a prophet both vulnerable and defiant, blessed with visions that portend the fate of the world. A rare and delicate creature, Cassie must be protected at all costs. Enter Caine, a powerful cur turned pure-blooded Were whose recent tangles with a demon lord have left him in serious need of redemption. Caine is duty-bound to keep Cassie out of danger - and that means resisting his potent urge to seduce her. As Cassie's mysterious visions lead them in and out of danger, Caine believes he has found his true mate, the woman with whom he is bound for all eternity. Cassie is both charmed and frightened by Caine's magnetism, and unsure if he - or her feelings for him - can be trusted. But Cassie can't afford to doubt Caine now. A deadly enemy bent on destruction is closer than they realize - and only they can keep chaos from ruling the world.

I wanted to read this latest story because the final Were sister got her day in the sun. Cassie has lived most of her life in a deep, dark cave outside the Chicago area, the same caves that are mentioned in every installment of the saga. Cassie's innocent beyond words and a seer to boot; she can go into one of her vision moments at any given time. Ivy addresses Cassie and her issues very early on with playful naive situations that were pretty funny. But soon those wear off and somehow by mid-book she's quoting Scooby-Doo and other various pop-culture things she really should not know about. I don't think cable reached the tunnels.

Caine started out earlier in the saga as a rouge of sorts, he was definitely not someone you would see as a potential hero. But as this saga has progressed, so has the growth in Caine; he takes a big turn and all in the right ways. Adding to that, his devotion to the seer, surfer boy good looks, and his drive to want to be a better Were left me pulling for the wolf by the end. The chemistry between the pair was spot on when they were actually part of the storyline.

Readers that know each book and each character may appreciate the previous cast of characters all coming out to play. I did find it a little too much though, I like getting updates and knowing they are part of the overall arc, but when you dedicate too much time to side stories you start to loose focus on what's going on now. I felt like the relationship issues between Cassie and her sisters were rushed and at times forced. One second she's talking about not wanting to see them and the next hugs and kisses are going around. A bit frustrating...

Overall the saga as a whole deserves a read, it's good. Not knock your socks off fantastic but solid enough to carry my attention for nine books.

***GIVEAWAY***
For your chance to win a paperback copy of When Darkness Comes (Book 1) fill out the Rafflecopter thingy below! US/Canada contest only. Ends October 20th at midnight!