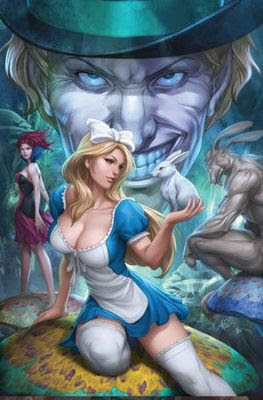 Decades ago, a girl named Alice was sacrificed into the horror-filled realm of Wonderland but her terrifying and awe-inspiring experiences there have been shrouded in mystery.

The one thing known is that her time spent in a world full of insanity left her a broken adult. However, her courageous will to survive is what ultimately saved humanity. Now the story of Alice’s visit into Wonderland is fully revealed and the truth of the terror will be told in full! From Raven Gregory, Ralph Tedesco and Joe Brusha, the same minds behind Grimm Fairy Tales and Return To Wonderland comes the newest series that Zenescope fans have been waiting for. What every Zenescope fan has been waiting for is finally here! Follow Zenescope back down the rabbit hole and find a world of madness like you have never seen before!

As I checked out an ARC of this graphic novel, I was struck by two things: 1) Alice wears even scant attire in the book than she does on the cover; and 2) What do the Grimm Brothers have to do with Alice in Wonderland? 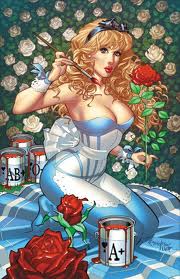 Well, maybe the whole "Grimm Fairy Tales presents" schtick is just a brand with Zenescope. Still, I didn't see a single mention of Lewis Carroll in the credits for this book at all, which struck me as a little weird. Granted, I doubt a stodgy 19th-century Brit would want his name associated with something so salacious.
I digress, aside from the initial premise of Wonderland, with plenty of winks and nods, Raven Gregory and company have created a universe much more dark, violent, and sinister than the cruelest moments of Carroll's fairytale. I've seen a fair share of re-imaginings of L. Frank Baum's Oz universe, but not a lot with Wonderland. Maybe I haven't been looking hard enough--or at all.

Raven Gregory, Joe Brusha, and Ralph Tedesco have created an intriguing twist on the mythos. These first six issues have Alice striking a bargain with the Jabberwocky as a child, tricking her into remaining his slave in Wonderland while a piece of her is sent back to the real world with a piece of the Jabberwocky inside her. Skip years ahead to Alice all grown up--and apparently unable to find any clothes that fit--and the White Rabbit comes to her rescue ... sort of.
The White Rabbit frees her, but she finds Wonderland might be even more dangerous outside the clutches of the Jabberwocky. It seems several parties are at work against her, including a Cheshire Cat that looks more sabretooth tiger than house pet, a Mad Hatter that makes Hannibal Lector look like Humanitarian of the Year, and not one but two sadistic queens (Hearts and Spades).
While the characters are a psychotropic roll call of the classics, the viciousness seems all new. Oh sure, there was some allegory and social commentary in the classic literature, but that's been set aside apparently for a carnival ride of carnage and titillation. Actions scenes are presented in all their gory goodness and ramp gradually until they come to a head in one gigantic standoff between Alice and the Jabberwocky in her final effort to get home.
All in all, the story epic in scale and sped along at a brisk pace, especially towards the end. The artwork got too gratuitous at times, though. I mean, depictions of women in comic books can get a little ridiculous and downright insulting at times, but I don't think it's quite so unapologetic as in this series. I don't mind a little cheesecake now and again, but there are points where it distracts from the story being told. And what I wanted most from this book was the story. Perhaps it's provocative for the very sake of being provocative. Who am I to judge? 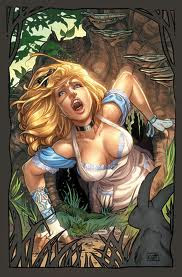 If you can get past the porn-star attire of Alice and the other female characters in this book, there is a pretty good story to be read. And, hey, if you love cheesecake, then you'll love this. 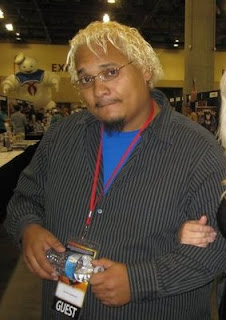 About the author:
Hometown: Phoenix, Arizona Favorite Zenescope Character: Calie but I'm bias:)
Favorite movie: Identity
Nickname: Panda
What superpower would you want?: flight
In a past life you were: a fluffy cloud In your next life you'll be: an actual raven
favorite band: Korn
Guiltiest pleasure food: Doritos
Pets: Two dogs named Zombie and Wacko