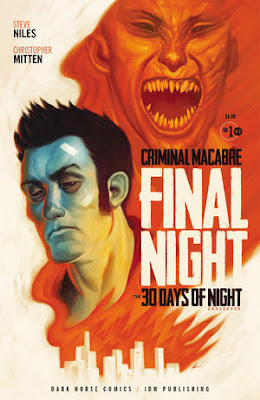 In this epic crossover with IDW, Steve Niles’s greatest characters come together in a final showdown.

Cal McDonald only wanted a beer, but what he got was a jaded federal agent and a story about vampires up in Barrow, Alaska. There’s a new vamp in LA, and he’s hell bent on escalating his attacks. When Mo’Lock’s sometimes ghoul-friend is murdered, Cal’s on the hunt . . . for Eben—the longtime protagonist/antagonist of 30 Days of Night.

* Dark Horse and IDW team up on this once-in-a-lifetime crossover!

“Fans of the horror genre really can’t go wrong with [30 Days of Night].”—About.com

Horror crossover of the year!

Do you know who Steve Niles is? Well, you should! He created two of the best comics out there. Criminal Macabre is a pulp-noir/crime and horror series that follows the exploits of the pill-popping, alcoholic Cal MacDonald and his straight-laced ghoul partner Mo’lock as they try to battle the forces of evil. I have reviewed several of the Criminal Macabre comics before (here) and fell in love with the troubled detective. Niles’s other famous comic, which I haven’t had a chance to read yet, is 30 Days of Night, which is about vampires that attack the small Alaskan town of Barrow. Barrow has a month of night which allows the vampires free reign.
Steve Niles has written many novels and comic series for each title and 30 Days of Night was even turned into a major movie. Both titles have a large and loyal fan base and it was only a matter of time before these two worlds collided.
In the last few issues of CM, Cal has discovered a war is about to be waged between the undead and humanity. In the recently ended 30DON series Eban, a once good vampire, has turned bad and is now building an army of vampires to destroy humanity. FBI agent Alice Blood is partially responsible for this turn of events and has come to Cal for help.

Criminal Macabre: Final Night #1 is the big showdown as Eban is invades L.A., pitting him against Cal. There is a lot at stake for fans in this epic battle, because there can only be one winner and losing will mean the end of a much loved series. 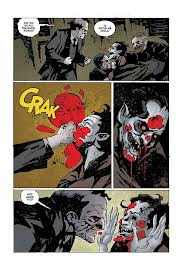 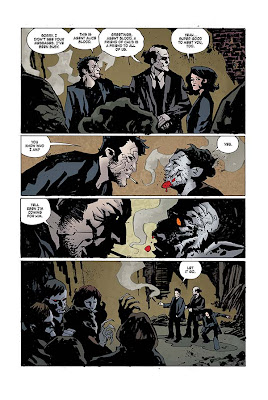 Final Night #1 is off to a great start. Using little detail and deep shadowing, which is a characteristic of the Criminal Macabre comics, the artist manages to capture the noir feeling but also to convey the dark humor of the series. I am not familiar with the 30 Days of Night comics but there is enough back-story included to catch me up on the motivations behind Eban’s actions. I think non-fans of either series will be able to enjoy Final Night, but there will be spoilers for the separate series if you decide to check them out.

I will be eagerly awaiting the next issue and cheering on one of my favorite comic characters.