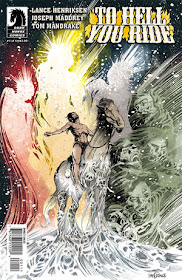 A deadly curse plagues a small town, melting the flesh from its victims--the violent revenge four warriors set in motion when their sacred burial grounds were disturbed for the sake of gold miners’ greed!

A new horror series written by Lance Henriksen (Millennium,Aliens, Near Dark) and Joseph Maddrey (Nightmares in Red,White and Blue: The Evolution of the American Horror Film), with art by Tom Mandrake.

Two words got me interested in this new five-part series: Lance Henriksen. I've enjoyed the heck out of his work in movies over the years, so I was keen to see what his own imagination had cooked up.

"White Man's Guilt" is the title for this first issue and recounts the gold rush in the Colorado Rockies, with scores of white men tearing up the land to get at the ore, desecrating sacred burial grounds beneath their feet. I imagine Indians weren't too tickled to have a bunch of avarice goons trampling up the wilderness, but start pissing on their ancestor's graves and there's bound to be some comeuppance.

It's a ritual of atonement that's performed, four braves each shoot an arrow into the air then race down the hillside and take the hit themselves. But when the white men see the braves racing into their encampment, they panic and shoot two of the them down before the arrows can do their work, and thus a curse is put upon the land.

Jump ahead to present day and a man with the nickname Two-Dogs whose cynicism and weariness are thrown for a loop when he finds one of the two missing arrows of legend. Still, in one of his drunken hazes, he manages to plow his old pickup right into a town memorial to those old white miners and earns himself a night in the drunk tank, talking to a sheriff that bares the slightest of resemblances to Lance Henriksen himself--go figure. 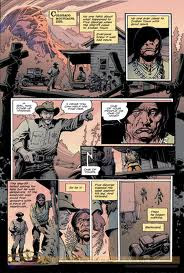 The picture isn't totally clear with this story yet, not entirely sure what the stakes are with Two-Dogs finding that arrow, or what it might mean when the other is found, but the characters and folklore are depicted with all the grit and realism a reader could ask for. Mandrake's illustrations do well in capturing the feel of history and how it's dragged into the present, with a lot of really good work in contrasting light and darkness.

Henriksen and Maddrey have got something here with a lot of promise, and I'm definitely interested to see where it goes in the next issue.