Edit: This book has been re-released through Seventh Star Press with a new cover 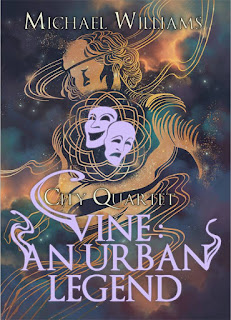 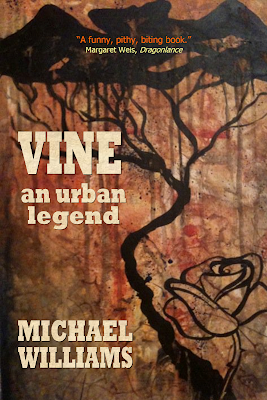 Vine: An Urban Legend
by Michael Williams
Genre: Mythic Fiction
192 pages
March 28th 2012
Amateur theatre director Stephen Thorne plots a sensational production of a Greek tragedy in order to ruffle feathers in the small city where he lives. Accompanied by an eccentric and fly-by-night cast and crew, he prepares for opening night, unaware that as he unleashes the play, he has drawn the attention of ancient and powerful forces.

Michael Williams' VINE: AN URBAN LEGEND weds Greek Tragedy and urban legend with dangerous intoxication, as the drama rushes to its dark and inevitable conclusion.

I am going to be honest… I can’t give this book a rating. I don’t think I was able to fully appreciate what Williams accomplished because I am somewhat culturally illiterate; my Greek mythology and knowledge of ancient Greek literature is way too rusty to help in my understanding of the story. I was able to grasp the author’s intent, but it reads to much like something I would have read in college, which is why I went into the sciences. <G> I don't think I am the demographic he is trying to reach because I found it work to read and understand. While the book was entertaining in its premise, it requires picking apart and analyzing (like in school) to truly appreciate it... a great choice for a book club. It needs your full attention and I like to think it was more my metal laziness than my intellectual failings that created the great WHOOSH sound I heard as parts went right over my head.

Williams wrote a Greek tragedy set in modern times, but he wrote it in the classical Greek play format. There is a large cast of characters including a host of narrators and a chorus giving commentary on the events. The author also has an amazing grasp of language and a vocabulary that had me looking up definitions at least twice per page (thank goodness for the dictionary function on the kindle!) I understood the basic premise of the story and even got some of the clever hidden layers of meaning woven throughout, especially when Williams compares the gods’ petty and vengeful behavior to man’s and shows that they are the same and things haven’t changed since ancient times.

I liked how Williams used the play within a play, like in Hamlet, as a vehicle to prove how alike the gods and man are. The protagonist, Stephen, is directing Euripides’ tragedy The Bacchae and the cast is also unknowingly playing out the story in real life as the ancient gods manipulate them for fun and for vengeance. The principals in the cast are also being manipulated in the same way by a vengeful game master, who behaves in the same manner as the gods, at their weekly D&D RPG. Like a vicious ironic circle of petty behavior.

I've read other reviews by people who are familiar with Greek literature and they are all impressed with the technical brilliance of the story and able to throw around words like allegory, metaphors and subcontext… Oh, My! And they are right, it is all impressively there, but this story isn't for everyone. I am glad I read it. I feel a little smarter for it and learned some new words I will definitely be pulling out at parties <G>. 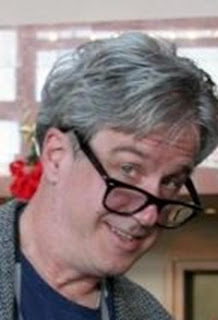 About the author:
website-FB
Over the past 25 years, Michael Williams has written a number of strange novels, from the early Weasel’s Luck and Galen Beknighted in the best-selling DRAGONLANCE series to the more recent lyrical and experimental Arcady, singled out for praise by Locus and Asimov’s magazines. In Trajan’s Arch, his eleventh novel, stories fold into stories and a boy grows up with ghostly mentors, and the recently published Vine mingles Greek tragedy and urban legend, as a local dramatic production in a small city goes humorously, then horrifically, awry.

Trajan’s Arch and Vine are two of the books in Williams’s highly anticipated City Quartet, to be joined in 2018 by Dominic’s Ghosts and Tattered Men.

Williams was born in Louisville, Kentucky, and spent much of his childhood in the south-central part of the state, the red-dirt gothic home of Appalachian foothills and stories of Confederate guerrillas. Through good luck and a roundabout journey he made his way through New England, New York, Wisconsin, Britain, and Ireland, and has ended up less than thirty miles from where he began. He has a Ph.D. in Humanities, and teaches at the University of Louisville, where he focuses on the Modern Fantastic in fiction and film. He is married, and has two grown sons.
Sharon Stogner at 1:00 AM
Share