Today we have something a little different being served. Alexa Egan created a Irish shifter dish with a regency flair. But be careful if devouring this at night... it has quite a bite. 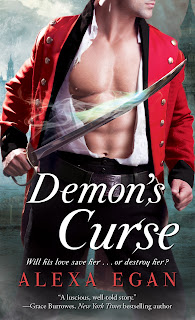 Equal parts hard-edged British soldier and legendary Imnada shapechanger
2 cat green eyes
1 pair of sensuous lips (may need tenderizing, but once softened are enough to overwhelm the most discerning palate)
1 set of battle-hardened shoulders burdened by the pain of exile
2 hands (strong enough to force a surrender from a ruthless killer, yet gentle enough to force a surrender from a beautiful woman)
A dash of Irish charm
1 potent dose of vicious Fey-blood curse

The temperature dropped as the sun sank lower toward the horizon. His body cramped, his nerves aflame with the curse’s blue fire. Every breath came laced with glass. Every movement pushed the needling, searing agony closer to his heart.

“Let me help you,” Bianca urged. “If you lean on me, we can get you back to the house. Jory can—”

“Leave,” he answered. “Leave now and don’t turn around. Not for any reason.”

“I can’t. What if she returns? What if something happens?” She grabbed him under the arm in an effort to hoist him up. “It’s a short walk. We can make it.”

He clamped his jaw against a scream, his weight too much for her as he slithered back to the ground. “Please, Bianca. If you . . . if you care for me, just go.”

Swallowed by the curve of the earth, the sun’s golden edge disappeared, the curse boiling up through him like lava, nerves flayed raw. With a roar of fury and despair, he stripped off his clothes even as the flames consumed him in a blue-white inferno. He toppled back to the turf as lightning arced through him, corrupting his body, spearing his brain.

True to her word, she did not leave. Blind to all but the river of flame, still he sensed her presence like a rock upon which he might anchor himself. An oasis of calm where all else was a fiery whirlwind.

“‘By night I sought him whom my soul loveth: I sought him, but I found him not,’” she quoted as night overtook them both.

As oblivion claimed him, he answered her, his lips curled back over extended fangs, a rumble deep in his pounding chest. My mistress with a monster is in love. 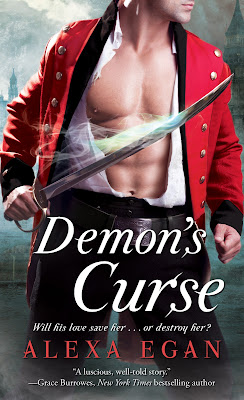 A rising star on the Covent Garden stage, Bianca Parrino believes she has everything she wants. Independence. Wealth. And a life finally free of her violent, abusive husband. But when her close friend, Adam, is murdered and Bianca is suspected in his death, she is unwittingly drawn into the search for his killer and soon must question everything she believes—about her friend, about herself, and about a world she never knew existed.

A member of the mysterious race of shape-shifting Imnada and part of an elite military unit, Captain Mac Flannery gathered intelligence during the Napoleonic wars. As a result of a savage massacre, Mac and the men he served with are cursed. Now one of them has been found murdered, and Mac suspects the existence of the Imnada has been discovered at last. His only link to unearthing the truth is the beautiful actress who turns up unexpectedly at Adam’s funeral.

Before long, Mac has more to contend with than Bianca’s overt mistrust, his ill-fated attraction to the haughty and beautiful actress, and his ongoing search for an end to the curse. Because Adam’s killer is back, and Mac is next on his list.

About the author:
website-fb-twitter
Alexa Egan lives in Maryland with a husband who’s waiting impatiently for her fame and fortune to support them in a new and lavish lifestyle, three children for whom she serves as chauffeur, cook, nurse, social secretary, banker, and maid (not necessarily in that order), one cat, one dog … and twenty-seven fish. You can find her at her website on Facebook or on Twitter.