Book Review: Ever After (The Hollows #11) by Kim Harrison 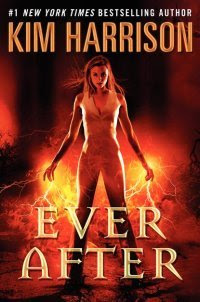 Ever After (The Hollows #11) by Kim Harrison

The ever after, the demonic realm that parallels the human world, is shrinking. If it disappears completely, so does all magic. It's up to witch-turned-daywalking-demon Rachel Morgan to avert catastrophe and keep life from changing... for the worse.

While saving the world is important, it isn't Rachel's only motivation. There's also the small fact that she caused the ley line to rip in the first place, setting off a chain reaction of unfortunate events. That little mistake has made her life forfeit unless she can fix it. It's also made her more than a few enemies, including the most powerful demon in the ever after—a terrifying entity who eats souls and now has an insatiable appetite for her. He's already kidnapped her friend and goddaughter to lure her out, and if Rachel doesn't give herself up soon, they'll die.

But Rachel has more than a few impressive and frightening skills of her own, and she isn't going to hand over her soul and her life without one hell of a fight. She's also got a surprise: elven tycoon Trent Kalamack. With this unlikely ally beside her—a prospect both thrilling and unnerving—she's going to return to the ever after, kick some demon butt, rescue her loved ones... and prevent an apocalypse before it's too late. Or, at least that's the plan

If you haven’t read this series here is the link to book one, Dead Witch Walking. Ever After is a kick ass story all on its own, but this is an urban fantasy series and the journey of these characters is what makes it emotionally satisfying. While I won’t give any spoilers away for Ever After (and boy, are there some biggies!) there are some character relationship issues that would spoil the beginning of this series for you.

Where to even start!? This is book #11 (out of #13) and Kim Harrison is still bringing the Boom! The story is moving along with a focused direction and we are still learning new things about The Hollows world. This book focuses on the demons and the Ever After. Where did it come from, why does it look the way it does, and most importantly why do demons behave the way they do? It is actually a little heartbreaking. Since we are dealing in the Ever After we get to see a lot of Al. I have no idea what Al’s HEA is going to be but it has sort of begun in this book and you won’t look at him or any of the demons, the same again.

For all the Trent and Rachel shippers out there I am cautiously optimistic. Their relationship has come to a turning point (don’t you love how vague I am!?) for the better. There is a permanent trust between the pair now, and they have one hell of fight coming up, along with a ton of diapers, in the next two books that they plan on facing together.

There isn't a lot of Ivy in this book and I find I don’t really miss her, but Rachel made a promise to help Ivy get her soul back. After seeing what happens to aging vampires, Rachel is more determined than ever to help Ivy and all vampires so I suspect we will find out how and if this can be done in the next two books. Jenks is starting to be more open minded and understand there is more to life than just the “Pixie” way. Harrison hasn't given us too many clues as to where is HEA is heading in this book. Bis also comes of age in Ever After; I LOVE that little gargoyle! The gargoyles play a big part in helping Rachel try to save the Ever After.

Most of you have heard there are some sad parts. Storylines have to be tied up and when you are dealing with a demon like KuSox people are going to die. I was floored by one of them.

The book as a whole is fabulous. The series arc is moving at a good pace and the book arc was an action packed page turner. I have been following this series for a long time and I am completely invested in them. When the last book comes… I don’t even know what I will do. I think Dr. Seuss said it best…

“Don’t cry because it is over, smile because it happened” – Dr. Seuss


I will be attending Kim Harrison's book signing Feb 2 in Raleigh, NC. There will be a post about the signing and a give away of some sort!