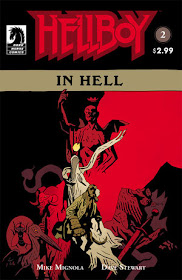 In Pandemonium, the dead wait for Hellboy to claim his throne, but is he interested..?

Mike Mignola returns to draw Hellboy's ongoing story for the first time sinceConqueror Worm. It's a story only Mignola could tell, as more of Hellboy's secrets are revealed.
Death was only the beginning.

After finding himself down in the dumps--literally­­--Hellboy has to navigated his way through Hell. At his side is the Dickensian spectre whose intentions are not all that clear, but with this second issue things are taking shape.

Hellboy stands at the gates of Hell's capitol in a sense, Pandemonium, and finds the city is deserted. Apparently word of his arrival has put the fear of God--well, maybe not Him exactly--into them and they've scattered. Even Satan is nowhere to be found, though Hellboy is shown a glimpse of his past and reminded more than once what his birthright is: to take Satan's throne. 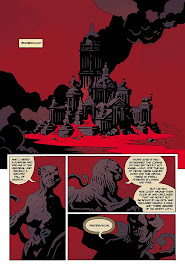 If the influences of H.P. Lovecraft, Charles Dickens, and Shakespeare weren't enough with the first issue, the second issue felt like it threw in a little Dante and Homer for added flavor.

Hellboy's birth is one of the scenes replayed for the ugly cuss's benefit, and if you're averse to seeing humans brought into the world, a hellspawn's isn't that much better to look at. Mignola's style has that rough-hewn quality he's famous for, and it seems pitch-perfect for this story, as Hellboy meanders through the underworld and witnesses the skeletons in his closet. And I'm talking the actual army of skeletons being forged for Hellboy, too.

Can't really say anything bad about this series so far. It's damn near perfect.