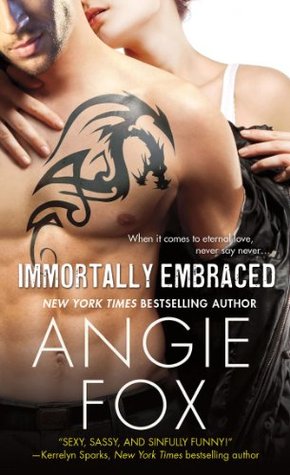 IN THE BATTLE OF THE SEXES… Even during a truce, Dr. Petra Robichaud has her hands full as the M*A*S*H surgeon to an army of warring gods—especially when Medusa herself turns up pregnant. Petra has no idea what to expect when a gorgon’s expecting, but she won’t let it turn her to stone. As the healer-hero of an ancient prophesy, it’s Petra’s job to keep the peace. But as the lover to a warrior demi-god, she knows how impossible some jobs can be…

IT’S EVERY GOD FOR HIMSELF. Commander Galen is sexy, strong, and sworn to lead his team to hell and back. But when he announces to Petra that he can no longer risk her life for his love, the doctor is on her own…Until a mysterious new entity—in the form of a hot-blooded male—enters the picture. Can he be trusted? Can he be resisted? Meanwhile, an oracle delivers another prophesy that places Petra back on the frontlines with the man she may be bound to for eternity—in love, or in war…
Read the first chapter

Immortally Embraced is the second book in Angie Fox’s M.A.S.H. trilogy. Here is the order of the books:


I read and reviewed book #1 Immortally Yours (here) and loved it.  Angie Fox is known for her light, humorous, and smexy romance series Accidental Demon Slayer. For her M.A.S.H. trilogy she decided to take a walk on the dark side. She has crafted a wonderfully original world where unbeknownst to humans, the old gods and the new gods (of all religions) are fighting it out in limbo and the fate of Earth depends on the outcome. The gods/goddesses have pulled certain humans some with supernatural talents into limbo to help with the wounded in army like M.A.S.H. camps. Fox manages to bring her trademark humor to this story, but she doesn’t let you forget the horrors of war and what it does to people emotionally and physically.

I can’t really talk about the romance because there is a love triangle of a sorts going on. Reading the books out of order will kind of spoil this aspect of the story but not the rest. I will say that after reading the first chapter of Immortally Embraced I wanted to cry and pull Ms. Fox’s hair out. Just kidding, I don’t want to really pull her hair out… much…


The series story arc about the war in limbo and the prophesies has really captured my attention and I can’t wait to find out what is going to happen in the last book or what new and crazy characters Angie will introduce us to . In Immortally Embraced we meet a berserker named Oghul who you don’t want to upset and a couple of very jealous and petty goddesses.


This is classified as a PNR and the romance is very much the PNR formula of “I can’t give into my feelings, yes I can, no I can’t…” which normally doesn't do a lot for me, but the backdrop for the romance is clever and there is enough world building to keep this urban fantasy lover happy. Another plus for the romance is the heroine Petra isn't like normal PNR heroines. She is more of a hero archetype. It is the hero in this book that has stayed chaste for 10 years because of his love for Petra and not the other way around… hence the love triangle I was talking about.


Here is an example of Fox’s humor:


Yow. Was it getting hot up here? I was starting to sweat. A jeep was bad enough, but if he thought I was going to ride over the Great Divide on dragon back…

He dropped his pants.

“Do you mind?” I asked, glancing behind us as he shucked his boots. Yes, I’d seen it all before, but not for ten years. And besides, I was still angry with him. And I kind of hated him and here he was stripping and Jesus on a pogo stick I’d forgotten how good he looked naked.

Also check out Angie's website for Paranormal News Network. PNN is the only news channel you will get in Limbo. 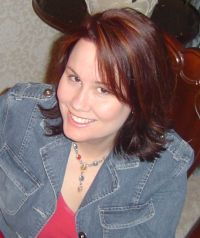 About the Author:
website-fb-twitter-blog
Angie Fox is the New York Times bestselling author of several books about vampires, werewolves and things that go bump in the night.

Angie earned a Journalism degree from the University of Missouri. She worked in television news and then in advertising before beginning her career as an author. Angie enjoys making up fun quizzes and thinks you should take one right now.
What's Your Biker Witch Name?