Arrapato the Vampire Dog Is Talking, He’s Telling All He Knows. 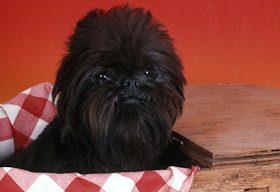 I’ve got a bone to pick with Piper Maitland. If she hadn’t come into my life, I’d still be a normal 8-pound Affenpinscher, dining on Alpo and ground sirloin. Now I’m a vampire dog, and it’s all her fault.
Piper: That’s not how it happened. The transformation was your master’s idea. Raphael adores you so much, he wanted you to be immortal. I didn’t “put” you in the novels. I looked down, and there you were, showing your teeth. Arrapato: Don’t blame your behavior on the woo-woo aspects of writing. You made the decisions. Own them. Though I’m glad you made me an Affenpinscher, not an parakeet. Piper: Lighten up. Immortality has its virtues. Your muzzle won’t turn gray, and your teeth won’t fall out. You’ll always be three years old. Arrapato: Yeah, but I celebrated my fortieth birthday last month. In dog years, that makes me 280-years-old. Piper: Still, you’ll always be healthy. No distemper. No fleas. Arrapato: And no sunlight, or I’ll end up flambéed. I can’t eat grass anymore. I drink my supper from a bowl. A liquid diet is boring. I fantasize about sinking my teeth into some Little Cesar dog food—the filet mignon flavor looks so tasty—but it’ll never happen. I’m a vamp. Piper: You’re still a dog. Can’t you chew a bone? Or bite squeak toys? Arrapato: Yes, but my fangs shred them in seconds. You would not believe the mess. Raphael just bought a DustBuster and a bagless Dyson. Piper: You love to chase vacuum cleaners. Arrapato: No, I hate the sound. I just want the lambs to stop screaming, so to speak. Piper: Poor Arrapato. How can I lift your spirits? Arrapato: Treat me with respect. Piper: I always do. Arrapato: Explain that scene in your novel, the one in Norway. You put me in a coffin! Piper: It was a UV-proof container. I was trying to protect you from daylight. Arrapato: If you’re so concerned about my welfare, why did you drag me into the sewers of Paris? Did you forget about my acute sense of smell? Did you have one drop of pity when I had a sneezing fit? Piper: I felt terrible. At least you weren't alone. Raphael and Caro were there. Arrapato: You could have handed out gas masks. And you mishandled the situation. I’m the alpha dog, but you put Raphael in charge. Don’t get me wrong—I love him to pieces—but he gets to do all the fun stuff. Me, I’m the canine sidekick. I’m not telepathic. I don’t even talk. Piper: You’re talking now. Arrapato: It stops me from biting your ankle. Piper: I've made you unhappy. Should I write you out of the series? Arrapato: I double-dog dare you. 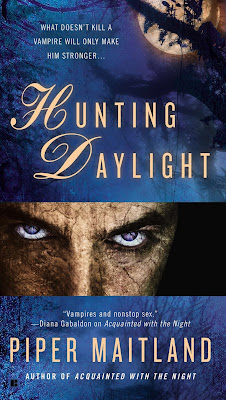 Out of the shadows...
For more than a decade, Caro Barrett has had doubts about the death of her husband, who disappeared while looking for a tribe of day-walking vampires in an African rainforest. Now, their daughter is struggling through her teenage years without a father. Waiting in the wings is an ancient vampire ready to possess Caro's heart--and to protect them both from harm. And, with her husband declared legally dead, Caro feels it is finally time to move on...
A hemisphere away in a windowless compound, an Ottoman vampire lies dying from a rare blood disease, which has made him vulnerable to the faintest bit of light. Yet he is determined to vanquish its power over him--to feel the sun on his face one last time. And in Caro's darkest fears he will be lifted into the light of day

About the Author:
webiste-fb-twitter
Piper Maitland lives on a Tennessee farm with her family. She is the author of the paramormal romance, Acquainted With the Night (Berkley/November 2011). The sequel, Hunting Daylight, will be published on 2/5/13 by Berkley/Penguin USA. Piper has also written novels under the name Michael Lee West.