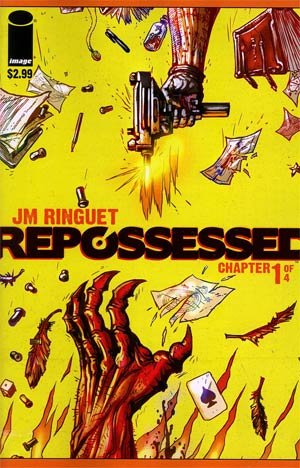 In a world where Demon possessions are commonplace it's up to a crew of overworked blue-collar repo guys to repossess the victims with old grimoires and big guns. The Dee Agency is hired by a rich NYC banker to repossess his daughter Sarah who ran away to Vegas. But the job is tougher than they expected and Demons of all sorts start popping up on the trail.

The setup for this series is really easy: three roughnecks hunt demons for a living. If that's not enough to get you just a little interested, then maybe there's a Care Bears one-shot on the stands you'd rather read.
Hunting demons is old hat, though. I mean, even before the days of Buffy. So J.M. Ringuet needed to find his own twist to make this stand out, and I think he's got something with real promise here.
Joe, Clay, and Martha are bounty hunters, only instead of tracking down lowlifes that jumped bail, their big game is of the demonic variety. Demonic possession is on the rise apparently, and the trio are a close-knit team that's tasked with finding those possessed, exorcise the demons, and collect the bounty. But lately, the demons have been getting bigger and badder--and on the offensive.
This first issue of a four-issue run does a really good job setting the stakes and the tone for the story, with artwork that's a little rough around the edges, which seems to suit the characters just fine. By the third page all hell breaks loose, at least a piece of hell, anyway. After one demon is downed, the team is put on a new case, working for a bigshot convinced his daughter is possessed and run off to Las Vegas. But the team quickly figures out there is more going on than they've been let in on.
issue covers #2-#4

Some of the story is telegraphed and feels a little well-worn, but there's a grit and grumble to it all that kept me turning pages. And the last page definitely has me inclined to look for the second issue.