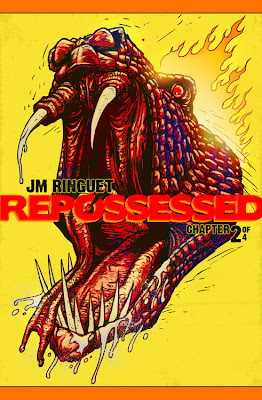 In this explosive new issue the repo crew heads to Death Valley and Miami, closing in on the possessed Sarah. But some traps are laid in their path and powerful Demons ambush them. Is there more to Sarah than they know? Who wants her and who's protecting her?

Picking up from the cliffhanger that was issue number one, the trio of demon hunters manage to talk their way out of a standout with an small army of gun-toting thugs. After the tatted-up muscle of the team, Clay, sees his cousin in the ringleader, things quiet down enough for them to learn the woman they're after, Sarah Gold, is long gone.
It also looks like Sarah Gold, or more precisely the demon that has possessed her, is orchestrating the whole effort to thwart Clay, Martha, and Joe. And since they survived the strip club ambush, the stakes are raised as they follow their next lead to a metal concert in Death Valley. And things only go bonkers once they chase her all the way to Miami. 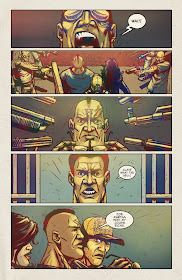 As far as the action goes, especially the demon battles, it's all pretty cool stuff. Each member of the team has their specialties in dealing with the various levels of hellspawn, from incantations and little potions, all the way to good ol' fashioned fire power. The chase, while feeling a bit like boss battles in a video-games, is fun to read too, but the motivations of team get a little muddled in this one--especially towards the end of the issue.

I'm still looking forward to reading the third issue, but the last page of this one really left me confused about the attitude of certain team members.

check out Gef's review of issue #1

A Four Chapter Graphic Novel in the Making - follow creator JM Ringuet on tumblr where he chronicles the making of Repossessed.