Book Review: How to Seduce An Angel in 10 Days + Giveaway 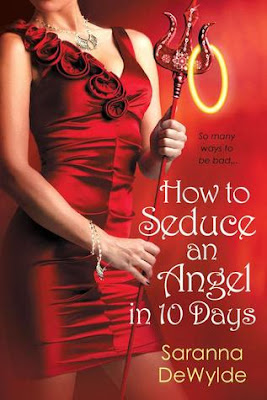 How to Seduce an Angel in 10 Days by author Saranna DeWylde is the third installment in her PNR 10 Days Series. As with previous books, the laughs, innuendoes, sticky situations and romance take up the bulk of the story. I was left with a belly ache from laughing until I cried!

Plot:
Drusilla "Tally" Tallow does. Both fallen and otherwise because she's got ten days of Heavenly and Infernal Parole after knocking Falcon Cherrywood from his broom. All she wanted was to settle down with a nice warlock, have babies, and grow old together. But she's got a bad habit of falling for the wrong warlock. She blames Cupid. Too bad her Heavenly Parole Officer is none other than the heart bandit himself--the newly appointed Cupid and current fixture in all her fantasies, Falcon Cherrywood.

After smiting Cupid with a fireball, Falcon Cherrywood must now play the Diapered Archer. He can't think of anything more humiliating than flying around in pink wings shooting arrows into hopeless fools. Archery was never his strong suit and Falcon doesn't even believe in love. But more troubling are the feelings his sinfully irresistible parolee sets off in him--for only Tally has the power to make him believe in things better left to fairy tales, like Happily Ever After.
I've said it before, and I'll say it again, this series is for those that loved Harry Potter but wished it had more "adult passion" and a dirty sense of humor. The non-stop jokes in the 10 Days series are over the top and do not disappoint. The hilarious situations these characters get into are so over the top that anything else the story may lack overall is wiped away by the comedic value. These are pure dirty-fun witchy tales. Abundant dark humor for those that love it.
This time around, our lead couple didn't have much of a ever lasting love vibe, but what they lacked in words is made up for in the romance department. Never a dull moment with this pair, that's for sure! I would have liked a bit more back-story on these two before we came to this point in the saga. A ton of information is dished out but I had no clue before now, just how intertwined these two were. It's all kind of dumped on your lap (literally) at times. I was able to trudge through and finally get into the groove, but this left me a tad disappointed.
As a stand alone, you could start from here but you will miss out on the past flavors the previous characters had. Nothing here is going to be life changing but that being said, it's not meant to be. Saranna is having fun as a writer and that comes through like a shinning star in all of her books.
This wasn't the best book in the saga but it's a fun read that's light hearted and will not stop until the last laugh is wrung from your body.

Kensington Publishers is giving away one paperback copy of How to Lose a Demon in 10 Days to one lucky US/Canada commenter. Make sure to list the following in the comments below.

1. Your Email Address
2. Do you follow us? Double points if you do!
3. Worst thing that happened on a date?