One of my vampire book boyfriends is visiting today! *squeee*. I don't care that he is condescending, arrogant and a bit fussy. I love him! 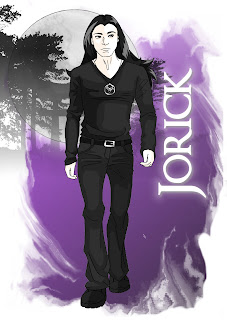 Jorick: Greetings… sheep? Is that a sheep? As in a furry, wool producing animal? Never mind, it doesn't matter. Why wouldn’t you be a sheep? It makes as much sense as anything else my crazy author has thrown me into!
I apologize for my outburst. Allow me to introduce myself. My name is Jorick and I’m a helpless victim in Joleene Naylor’s Amaranthine series. She’s been abusing me for five books (six if you count her short story collection and seven if you include the unreleased prequel). How much can one vampire take before he snaps? How many times can I be irritated by an idiot, thwarted by some ridiculous twist or lose someone I love before it’s too much and I go over the edge?
That was a rhetorical question. *takes a deep breath* to be fair to that menace of an author, she’s gotten a little better. She hasn't tried to kill my mate, Katelina, for at least two books. Though no doubt she has something spectacular planned for the next novel. And of course there will be another one because she can’t just let us be in peace. No! That would be too easy!

*Jo cuts in.* Ahem. I hate to interrupt your rant, but would you rather I just leave your story hanging? Heart of the Raven was a good book, but there’s some unresolved issues.

Jorick: It’s hardly unresolved. We’re heading back to Munich, and then to the beach and then home. End of story.

Jo: *snickers* Hardly. What about Malick? And what about that little mess you guys made at the temple? You know who I’m talking about. You’re planning to just leave that running around the world?

Jorick: Yes, actually. It’s not my responsibility. I’ve been the head of the vampire-world-defense league long enough. Someone else can do it.

Jo: You’ve never been the head of anything, let alone a world-defense league. Everything you’ve done, you’ve done because you’re nosey and you can’t stand to see someone messing it up. Someone starts a war, and they make a muck up of it, and you run in and sort it out, all while grumbling that you have no choice.

Jorick: You’re the one who forces me into those situations, to “keep things interesting”. I’m not the one who scrolls through the manuscript and says, “Gee, it really needs some violence here. Who can we kill and how can we kill them?”

Jo: Of course not, because that would mean you were involved in the story, rather than just along for the ride.

Jorick: Ride? More like a nightmare trip from hell! And that redheaded idiot is the leader of the arch demons! 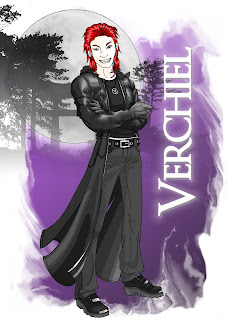 Jo: Are you talking about Verchiel? Arch demon is pretty harsh.

Jorick: You’re right; it’s too much for him. He’s more like a toe biting minion. If you have to keep torturing Katelina and I, the least you could do is kill the redheaded idiot. You want me to participate? I’ll set the scene for you. The sky is dark and strewn with diamond stars. The sandy beach stretches into the distance and the dark ocean rolls in and out, the waves playing a rhythmic night symphony. Suddenly, from the shadows leaps a furious vampire. His dark eyes blaze and his heroic muscles bulge as he leaps on his red-haired prey and knocks him to the ground. With a single swift motion he-

Jo: Whoa, wait a minute. First of all, we are NOT killing Verchiel. Second of all – Heroic muscles? If I wrote that I’d be laughed out of the book business.

Jorick: I’ve read your…work. Heroic muscles is an improvement. And why can’t we kill him? He serves no purpose except to irritate me, harass Katelina, and try to create the hint of a love triangle, which we clearly don’t need. Katelina and I are perfectly happy together and he is nothing more than in irritant!

Jo: And there’s the truth. You’re jealous! You’re afraid he’s going to get his triangle. Or that he’s going to turn her. Or link her. You know, I actually thought about that.

Jo: *shrugs* It was a passing thought. You’d be surprised how many interesting ideas I have that I don’t do anything with. Like a Katelina/Kateesha scene I abandoned. That’s really the hard part of being the author. Everything you write is canon. It’s not like some fanfic writer who can do outlandish things and then walk away, no harm done.

Jorick: Then why don’t you go write fanfic and leave us alone? 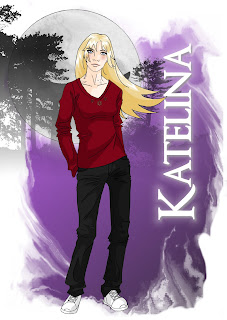 Jo: I’ve thought about it. Not leaving you alone, but writing my own fanfics. I could post them under a fake name and have all kinds of fun. Think of all the things we could do! I could kill you one by one and have no repercussions! I could send Katelina on a wild weekend with Micah-

Jorick: WHAT? Are you insane? She would never-

Jo: Hello! That’s the point of fan fiction. Never mind. I have too many things to do to listen to you complain. I just stopped in to say hello to the sheep, who happen to run my favorite review blog, and pat Baaaaaart on the head. (He’s so cute). I should also thank them for putting up with you.

Jorick: You should thank them for putting up with you and your inane idea of a guest post. This was really the best you could do?

Jo: *waves her magic writer’s wand* *Jorick disappears* Goodbye Jorick! Thanks for playing! As I was saying, thanks so much for having us over today. Sorry that Jorick complained so much, but you know how he is. He wouldn’t be happy if I stabbed him in the heart with a new stake!


If you’d like to learn more about Jorick, Verchiel and the rest of the chaotic cast you can check out my blog at http://JoleeneNaylor.wordpress.com or my website at http://JoleeneNaylor.com  and if you’d like to read Jorick’s latest adventure (which is only half as torturous as he claims) you can pick it up on Amazon, Barnes & Noble, Apple, Smashwords, and other ebook retailors, or in paperback. 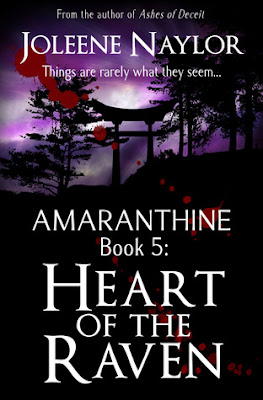 Heart of the Raven (Amaranthine, #5)
A myth with the power to destroy the world…

Katelina has barely recovered from the chaos of Malick’s revolt, yet she and Jorick must go to Munich to testify before the True Council. All hopes of a vacation are dashed when they ‘re assigned an entourage that includes Verchiel, a vampire Katelina never wants to see again.

Her hatred is forgotten when Malick and his henchmen penetrate the stronghold in Munich. Jorick hijacks the trip and diverts them on a quest to reclaim the Heart of the Raven. Said to be the disembodied heart of Lilith, the relic may be more reality than myth, and if it falls into the wrong hands it could have disastrous consequences for the world. Can they reach its hiding place before Malick?

The fifth installment of the Amaranthine series sees Jorick and Katelina draw closer as they surround themselves with their own miniature army and try to outwit the machinations of the ancient master. Katelina grows stronger and learns to stand on her own because there’s no room for the fainthearted in a world where darkness is eternal and the night tastes like blood. 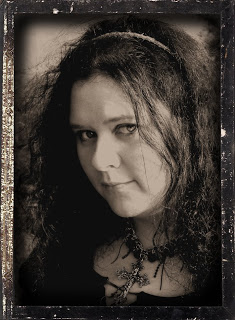 Joleene Naylor grew up in southwest Iowa surrounded by soybeans, corn and very little entertainment – so she made her own. She has been writing and drawing since she was a small child, with a particular leaning towards fantasy, horror and paranormal. It is this love of all that goes bump in the night that led her to write the Amaranthine series.
In her spare time she is a freelance artist, book cover designer and photographer. Her current projects include the fifth novel in the Amaranthine series, and Patrick: The Prequel. Joleene maintains blogs full of odd ramblings and hopes to win the lottery. Until she does, she and her husband live near Bolivar, Missouri with their cats, dogs and turtles. However, unless they start buying tickets she may never win anything.


First time author? Check out The Self Published Authors' Lounge for tips and advice!

all books available for ereaders and print.
These are the print covers that Joleene created. You can get to the ebooks through these links too.


GIVEAWAY
Joleene is giving one winner an ecopy of Heart of the Raven (my favorite in the series!)
win some Amaranthine series swag at Sunday Swag
a Rafflecopter giveaway
Sharon Stogner at 4:00 AM
Share