Terri-Lynne's sci-fi thriller is about a young woman named Kinzie, and her father Ben Nicolosi , is one of the author's favorite characters. He didn't have a large role in this book so Terri-Lynne was glad to let him tell the story of how Kinzie became his daughter.

Foreseen glosses over the details of how the protagonist was found at a young age. Here, Ken Nicolosi fills in the story.

My daughter had asked a direct question: how had she come to be mine. Kinzie wanted to know the truth. Maybe I shouldn’t have lied to her all these years, but I couldn’t face the memory of those endless nights, wandering aimlessly through the small apartment, only to have my eyes catch on the frozen image of a bride in a white gown. My throat would tighten, strangling a cry as my hands clutched the photo in the silver frame. My beautiful Marjie. Never again would I hear the lightness of her laugh, although it still haunted my dreams. Never again would I hold her in arms that still ached with her absence. Never again.

I brushed the tear from the corner of my eye and took a deep breath. That was long ago.

“It’s hard for you to remember back then,” Kinzie said sounding apologetic. “Because of your wife, I mean.”

I looked at the concern on the eighteen-year-old’s face and gave her a smile. “Yes, but it’s time you knew.”

I stared at the wall above Kinzie’s dark head. Should I tell her that friends had worried that I might kill myself? Or that on that morning – that moment that changed everything – their concern was on the mark? No. I would spare her my agony and start with the simple fact that I could no longer live at the Rothston Institute. I closed my eyes and tipped my head back, talking as the memories filled me.

“It was hard to stay at Rothston with the pain and the memories of Marjie and since I wasn't adept like the others, I didn’t belong there alone. It was early in the morning – the sun was barely up – and I set out for the cemetery. I went there every day to talk to Marjie, even if she didn't answer. But that day, I…” The words caught in my throat and I swallowed hard to push down the emotion. “I needed to tell her what I was going to do.” I let out a breath and paused as my throat loosened. The hard part was over. The rest was a good memory.

“A bundle on the third step caught my eye when I stepped outside. I sat down, expecting to find an unwanted litter of puppies or kittens squirming inside the lump of purple beach blanket.”

“But it was me?” Kinzie asked, half skeptically. “Just dumped there?”

“That was you,” I confirmed. “You studied my face feature by feature like it was some great puzzle. You didn't smile, just looked determined, then climbed into my lap with a satisfied expression. I felt like I’d passed some test. And then you said the darnedest thing. ‘You my dad,’ you said. You had a little lisp and I’ll never forget those words – or the shock. Melvina Whitacre found us there. I must have dozed off puzzling over who you were. She asked if you knew your name and you piped up with, ‘I not stupid. I Kinzie Louisa Cla …’ And you stopped, right in the middle like that, took a breath and said ‘Nicowosi.’ I guess you couldn’t make the L-sound.”

The young woman across the table gave a short laugh at my imitation of her toddler self. “So that was it?” she questioned. “What about the note that Mel showed me?”

“Yeah,” I chuckled. “After swearing that you couldn’t be mine – I mean, I’d been a married man up until a couple months before, and… well… Anyway, you pulled up your shirt to show us a note addressed to Mel that was taped to your back. I knew it was from Nate. He’d been my best friend before he disappeared and I’d still recognize that messy scrawl today. Melvina read it but didn’t know what to make of it. Have to say, I was surprised myself, given how close your dad and his uncle were. But he asked for me to raise you, not him, and said for me to do it wherever I wanted. To me, that had to mean he didn’t want you growing up at Rothston – I mean, there wasn’t any reason for me to stay.”

I paused, wondering what my adopted daughter was thinking as she bit her lip. Once she’d gotten over the shock a few months ago, she’d seemed happy to find out about Rothston and her special skills, but now there was something wistful about her. Maybe I’d been wrong to keep her away from there for all these years, but I hadn’t thought so then. That morning, fifteen years ago, I’d cradled her in my arms, raised my head to the blue sky and offered a silent prayer of thanks to Nate Clarison wherever he was – and to Marjie who must have been looking out for me. The child – the beautiful grown girl sitting across from me – had given me a reason to live again.

Kinzie’s dark eyes raised to mine. “You were right, Dad. He didn’t want me there,” she said somberly. “But there’s only one problem.”

“What’s that, Kinz?” The hairs on my neck prickled at her tone. 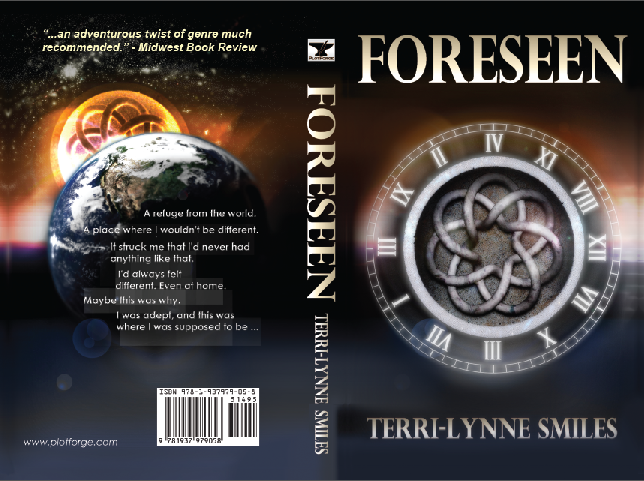 What if you could change the thoughts of others?

The Rothston Institute can manipulate the choices of anyone in the world: you, senators, anyone. Fortunately, it has the self-discipline to use this power to keep humankind safe. Stopping wars, averting crises, advancing peace.

To accomplish these feats, their operatives must train, and college student Kinzie Nicolosi has just become one of them. A student missing an exam? A construction worker fired for an industrial accident? A Congressman ruined in scandal? Necessary consequences of honing their skills for the greater good.

But Kinzie brings more than her remarkable skills to Rothston. She bears an unexpected power that rivals Rothston's own. And when she stumbles onto the real intentions of Rothston's leaders, the clash may be something none of them can control. 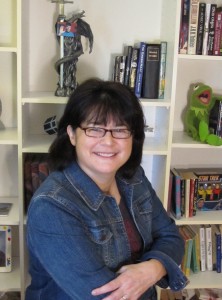 About the Author:
website-fb-twitter-goodreads
As a child, Terri-Lynne Smiles played the piano, guitar, violin, recorder, autoharp, ocarina, and banjo before taking a good, hard look at herself and realizing she had no musical talent. With a degree in Philosophy and Economics from Denison University, Terri married the love of her life and attended law school at the University of Michigan. While the law often fulfilled the analytical part of her brain, her creative side turned to baking and soon Volcano cakes, three dimensional Death Stars, and cupcakes topped with handmade candy butterflies soon found their way into Terri’s kitchen. But instead of satisfying her, all it did was make her fat. So she turned to her less calorie-laden passion – writing novels that explore new ideas and the nature of humanity.

In 2012 her debut novel, Foreseen, a science fantasy (think of the old Twilight Zone episodes done with production values and placed in a current setting) was touted as “a nuanced page tuner” and a “worthy sci-fi thriller á la Dean Koontz” by The Kirkus Review, saying that “First time author Smiles has devised a convincing supernatural culture.” Choices, the sequel to Foreseen will be released in Spring 2013, and a separate, futuristic novel, Sarandipity, following in Fall 2013. Find out more about Terri or sign up to receive email updates on her work at www.terrilynnesmiles.com.