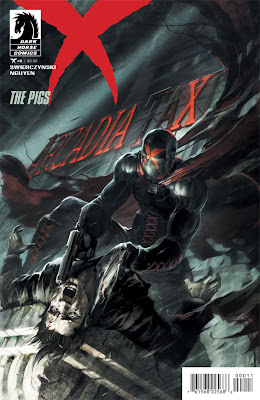 Three crime lords in the decaying city of Arcadia have received photographic death sentences from the mysterious “X Killer.” Their cunning defenses won’t stop Arcadia’s vigilante from making sure each one of them suffers.

I am already a fan of Duane Swierczynski's writing, thanks to the Charlie Hardie trilogy, but until now I hadn't read any of his work in comics. Now that have, I may be an even bigger fan of his writing.

X #0 is really a collection of a three-part story that originally appeared in issue of Dark Horse Presents. Waiting three months to get this whole story would have aggravating, so glad I got the chance to read it for the first time with this book.

Subtitled "The Pigs", this issue highlights a decayed and corrupt city called Arcadia, run by a trio of gluttonous, avarice, and wholly sadistic mobsters. Their cozy empire is being challenged, however, by a masked vigilante with a penchant for very bloody deaths, whether by sword or gun. X isn't fussy, though he shows exceptional prowess with shish-kabobing bad .

Eric Nguyen's artwork really brings out the ugliness of the personalities in this story, and he's given ample opportunity to show his proficiency with blood spatter. Oh my lord, the spatter.

As for X the vigilante, it's hard to get a read on him, as the story is essentially told through the eyes of the villains, as they try to lure X out of hiding and ambush him. X doesn't appear to have exploitable weaknesses, although if he has a superpower it would have to be the ability to withstand a metric ton of beatings and still drag himself to his feet.

This zero-issue left things off in such a way that I'm really keen on checking out X #1 when it's released. It feels a bit like Die Hard meets Punisher, and in all the right ways.