{Katie and Sharon are silently quaking under the bed, whispering}
Katie: Who the hell invited the Beast to guest post!? Is this some kind of April Fool's Day joke?"
Sharon: I might have, sort of, kind of...
Katie: WHY!?
Sharon: I invited Faith Hunter and her character Jane Yellowrock. No one said anything about a sheep eating beast. The 6th book in the Jane Yellowrock series, Blood Trade, comes out tomorrow and I thought-
*Katie bops Sharon on the head*
Sharon: OW!
{Sharon and Katie freeze}

After a NAP
(See Jane Run)
Sheep. I smell sheep. Beast lifted nose into the air and sniffed slowly, then quickly. Hacked. Opened mouth. Drew air in over tongue and roof of mouth. Flehmen behavior, word learned from Jane. Smell sheep. Easy prey. Unless big dog is near.

Beast rose from heated rock in sun and padded to ground, drawing air deep. Sheep only. No stupid dog smell. Easy prey. Hunched shoulders up and dropped head down. Pawpawpaw along rabbit path through forest. Past den. Good place to have kits, deep cave in rocks, narrow entrance. But big enough to pull sheep/prey/food.

No, Beast! Jane woke from sleep and thought fast. These are special sheep. Sheep that might cast a spell on you, like a net and haul you up into the trees to dangle like a pendulum.

Beast paused. What is pen-du-lum? Is it good to eat? Does it have hot blood and much meat like sheep?

Want sheep. Want to eat sheep. Lifted lips to show killing teeth.
These are people, not sheep. And you can’t eat people.

No. I’m not stupid. It’s a blog that smells like sheep, written by people who smell like people. Probably.

It’s a blog. And we are supposed to be guests here, but if you eat the bloggers that will spoil everything.

All meat spoils. Must eat fast to keep meat fresh.

That’s not what I meant. Besides the people don’t smell like sheep. They smell sheep. (Jane made quotation marks in air.)

Jane is confusing. Why are fingers in air like hooking claws? Jane wants Beast to eat bloggers-who-smell-sheep slow? To use claws like hooks to hunt and hurt bloggers?

Beast chuffed with laughter and lay down in path. April Fools Day, Jane.

From the writer, Faith Hunter: For more Jane and Beast, Blood Trade will be out April 2, from Penguin/ROC. Like, tomorrow, Y’all! 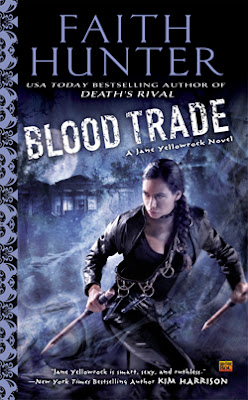 The Master of Natchez, Mississippi has a nasty problem on his hands. Rogue vampires—those who follow the Naturaleza and believe that humans should be nothing more than prey to be hunted—are terrorizing his city. Luckily, he knows the perfect skinwalker to call in to take back the streets.

But what he doesn’t tell Jane is that there’s something different about these vamps. Something that makes them harder to kill—even for a pro like Jane. Now, her simple job has turned into a fight to stay alive…and to protect the desperately ill child left in her care. 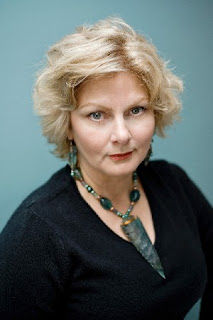 About the Author:
website-fb-twitter-blog
Faith Hunter, fantasy writer, was born in Louisiana and raised all over the south. The Skinwalker series, featuring Jane Yellowrock is taking off like a rocket withSkinwalker, Blood Cross, Mercy Blade, Raven Cursed, Death’s Rival and Blood Trade. Her Rogue Mage novels, a dark, urban fantasy series—Bloodring, Seraphs, and Host—feature Thorn St. Croix, a stone mage in a post-apocalyptic, alternate reality, urban fantasy world. These novels are the basis for the role playing game, Rogue Mage.

Under the pen name Gwen Hunter, she writes action-adventure, mysteries, and thrillers. As Faith and Gwen, she has 20+ books in print in 28 countries.

Hunter fell in love with reading in fifth grade, and best loved SiFi, fantasy, and gothic. She decided to become a writer in high school, when a teacher told her she had talent. Now, she writes full-time and works full-time in a hospital lab, (for the benefits) tries to keep house, and is a workaholic with a passion for travel, jewelry making, white-water kayaking, and writing. She and her husband love to RV, traveling with their dogs to whitewater rivers all over the Southeast.


international
a Rafflecopter giveaway
Sharon Stogner at 2:00 AM
Share