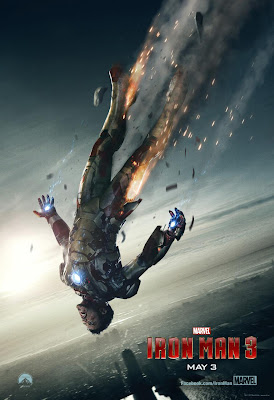 When Tony Stark’s world is torn apart by a formidable terrorist called the Mandarin, Stark starts an odyssey of rebuilding and retribution.

It doesn’t get more anticipated than this, does it? Iron Man 3, the dawn of Avengers: Phase II and the first Marvel standalone after the world conquering Avengers (Assemble).

But does it hold up? Iron Man 3 is directed by Shane Black from a screenplay by Drew Pearce and Black himself. The two gentlemen appeared on stage at the press screening we attended in London last week (yes, it nearly put us crazy not being able to tell everyone what it was like!) and both were very worried about how we would like the film. They needn’t have worried.

Iron Man 3 is a very fast-moving film with arguably some of the most spectacular visual effects seen in any of the Marvel-verse movies so far.

It’s difficult to review without giving much away – but since it’s so important to many people we’ll keep plot details to a minimum, a more indepth, spoilerific review will be here on Thursday .

As in the previous Iron Man movies, the performances are top notch, with Downey jnr owning every scene and the inclusion of new villains Guy Pearce as Aldrich Killian and a phenomenal – and surprisingly funny – Ben Kingsley as The Mandarine proving a master stroke, both tackling Stark in different ways. After all, this man saved the world in The Avengers movie, so we needed to get to the core of the man, not the hero. And Black does so with aplomb, creating a vulnerable but cocky hero who is lost at sea after the events from the aforementioned Avengers.

Black and Pearce’s script tackles more than just moneyshots, even if it uses the comics’ Extremis plot loosely. Black, the man behind the Lethal Weapon success and such awesome outings as Kiss, Kiss, Bang, Bang is the film’s strength, bringing home the man, the struggle, the hero, the trauma and the fun. Yes, don’t let the trailers let you think otherwise, this movie is dark in parts but so very funny – and fun – in others.

Black’s direction is pitch perfect too, with the action scenes handled with a defter touch than Favreau displayed in Iron Man 2, giving us what is arguably, outside of Avengers itself, the best Iron Man yet. Oh, and a special mention too to Gywneth Paltrow as Pepper Potts who is the perfect foil to Stark’s man on the edge.

I want to really get into the plot, but will leave it for you to enjoy but let me sum it up like this: top notch performances, a story that hits hard but is laced with fun, solid performances and a subtle use of 3D – If you see it in this format – all come together to what is an impressive kick-off for summer 2013. It’s going to be a hot time on the old cineplex this year…

It gets the highest recommendation from this reviewer… just go see it.