Today one of my favorite urban fantasy authors has brought some characters from her H&W Investigations series. These three weres live with Alec Royce and his vampires. But how did they end up there? What is their story? Jess Haines wrote Silent Cravings to answer those questions! So I will now turn things over to Jess...

Hello there! Jess Haines here. I’m the author of the H&W Investigations series—urban fantasy novels about Shiarra Waynest, a human private investigator in an alternate, present-day New York. Somehow she keeps getting pulled into supernatural troubles way above her pay grade…

For this stop on the blog tour, my co-author from my most recent release, a co-written paranormal romance novel called SILENT CRAVINGS, has loaned me a hand and her characters for the day. SILENT CRAVINGS is a spinoff of the H&W Investigations series. One thing I haven’t really discussed anywhere about this book is that my co-author’s characters originated in Los Angeles, which means Shiarra gets to meet some of the pack members of the werewolves staying as “guests” with Alec Royce and his coven of vampires in New York.

Question: How well do you, as werewolves, get along with other things that go bump in the night?

Christoph: I think she means other Others.

Christoph: I dunno, ask her. I was thinking we were supposed to talk about the vampires. You know, since we’re stuck with them. Or maybe the other werewolf packs. Those local guys, the Sunstrikers, are real pricks.

Analie: There’s a lot of complex inter-pack relations, but that’s a little boring to get into in an interview.

Christoph: Goliaths don’t get along with vampires, though the three of us are obviously pioneers in Goliath-vampire dealings. Well, maybe not Ashi.

Analie: Goliaths don’t have dealings with magic-users, but we don’t have any animosity toward them. They’re just creepy.

Christoph: Oh, right. Well, for the most part other shapeshifters don’t bother us. You know, animal shapeshifters. They tend to avoid us because werewolves are naturally aggressive.

Christoph and Analie: We don’t talk about those.

Christoph and Analie: We don’t talk about those.

Analie: They’re the opposite of traditional shapeshifters, which are magical beasts that can take human form. They’re all sentient, but not really...sapient. They don’t think like a human. There aren’t many of them, but they’re out there. Some coyotes can do it, but those are really the only ones you see around California.
Ashi: There are a few kinds in Japan that do it and they’re all d**** to humans. Foxes, badgers and tanuki.

Ashi: It’s like a raccoon. They look—sort of—the same. Tanuki are the magic version of those. They have giant, shape-shifting balls.

Christoph: You’re just making this up to get out of the interview.

Ashi: Wikipedia the damn thing, then. It’s a magical raccoon-dog with giant, shape-shifting balls. And they turn into people on occasion.

Christoph: Their balls turn into people?!

Ashi: Wh—no! No, you moron, the tanuki turn into people.

Analie: I’m afraid to ask, but do they still have giant balls?

Ashi: No, they have normal-sized b—

Ashi: What the hell is wrong with you people?

Analie: Hey, you’re the one with magic-balled raccoons.

Ashi: It’s the Japanese! I’m not even Japanese! Blame them!

Christoph: Wait, the Japanese have giant—

...umm. Well, Analie, Christoph and Ashi may not always get along, but they’ll always be Goliaths! You’ll get a glimpse of them in FORSAKEN BY THE OTHERS, but be sure to pick up a copy of SILENT CRAVINGS if you want the full story behind how they became permanent “guests” in Royce’s household.

Thanks again for having me and the gang over, Sharon, Katie, and the rest of Team Sheep! 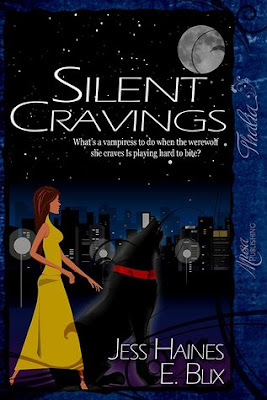 The Goliath werewolves, a California pack hoping to expand into new territories, made an extreme error in judgment when choosing Christoph to be their representative for negotiations in New York. After two fights in the open with another supernatural, Christoph orders a lower-ranking teenaged Were to take the downfall for his mistakes by serving in his place under vampire Alec Royce’s watchful eye.

When Christoph and another packmate try to save the girl from Royce’s clutches—never mind the inevitable war they’d start in the process—the two are outcast from their pack. The vampire once again demands servitude as recompense, and they soon find themselves magically “neutered” by enchanted leather fetish collars so they can’t hurt themselves or anyone else in the vampire’s entourage. Hey, the collars were all Royce had handy at the time.

Just when Christoph thought it couldn’t get any worse, a mute vampire named Mouse decides to claim him, taking him for her own. She has her own set of problems, what with being mentally damaged by her sire, Max Carlyle, who delighted in enforcing her monstrous nature. She hungers for Christoph, but can’t stand to see someone victimized or—even worse—afraid of her.

Christoph is taught the greater lesson of what it really means to follow the Goliath Code of Honor and Mouse narrowly avoids a nervous breakdown in the process of accepting her own predatory nature. The two must learn how to live together (and deal with his new accessory)—without driving Royce and the rest of his household crazy in the process.
Buy link: amazon 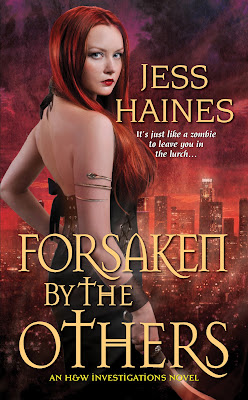 The Others–vampires, werewolves, things that go chomp in the night–don’t just live in nightmares anymore. They’ve joined with the mortal world. And for private investigator Shiarra Waynest, that means mayhem…

Have a one night stand with a vampire, and you can end up paying for it for eternity. P.I. Shiarra Waynest, an expert on the Others, knows that better than most. Yet here she is, waking up beside charismatic vamp Alec Royce with an aching head…and neck. Luckily, Shia has the perfect excuse for getting out of town–namely, a couple of irate East Coast werewolf packs who’d like to turn her into a chew toy.

On Royce’s suggestion, Shia temporarily relocates to Los Angeles. But something is rotten–literally–in the state of California, where local vampires are being attacked by zombies. Who could be powerful enough to control them–and reckless enough to target the immortal? Following the trail will lead Shia to a terrifying truth, and to an ancient enemy with a personal grudge…

Jess Haines, author of urban fantasy and paranormal romance, is a displaced New Yorker who writes about vampires, werewolves, and other bitey creatures of the night from her home in Southern California. She's best known for the H&W Investigations series

Find her online:
FB/Twitter/website/blog
You can check out our interview with Jess Haines here 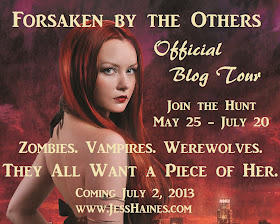 There is a US only giveaway and a separate International giveaway
(there are two raffledudes, make sure to use the right one)