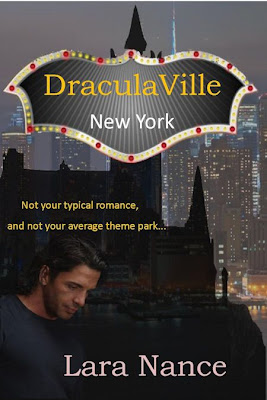 DraculaVille, (New York #1)by Lara Nance
Super Ad/Publicity Agent, Talia Quinton, is poised at the top of her career to receive a much coveted job representing the world’s largest advertiser. She’s shocked and humiliated when the account is given to a rival agent with much less experience. Instead, Talia is ordered to come up with a publicity plan to bring tourists to Romania. An account not worth a tenth of the one she’d hoped for.

But she’s not called Talia the Tiger by the New York ad world for nothing. When she discovers a newly made and abandoned vampire named Drake, she takes on the job of healing and grooming him into the face of her new campaign.

Instead of touting the ancient country's rolling hills and historic castles, she turns the advertising world on its head by bringing Romania’s dark past to the center of the presentation. She proposes they build a fantasy themed amusement park/resort for adults called, DraculaVille, right in the heart of Transylvania. And Drake will pose as Dracula, their spokesperson. A vampire pretending to be an actor, pretending to be a vampire.

Talia’s disturbing attraction to Drake is only one obstacle in her path. She soon discovers New York fairly swarms with warring vampire communities and she and Drake have landed right in the middle of their biggest conflict. On top of that, the odd members of the Romanian National Publicity Committee begin making strange demands that keep Talia constantly on the edge of losing the account and her reputation as New York’s most formidable Account Executive.

As a last straw, Talia and Drake are kidnapped by a ruthless vampire gang and forced to fight for their lives as the clock ticks on completing the assignment necessary to retain the DraculaVille account. Their only hope of gaining freedom is to consent to an ancient vampire bonding ceremony. There's one problem. To complete the ceremony, Drake must kill Talia and turn her into a vampire. But despite her unavoidable attraction to the hunky vampire she saved, Talia's not ready to die.

I admit it; I judged this book by the cover. If I hadn't promised to review it, I probably would haven’t picked it up and I would have missed out on a sweet romantic urban fantasy. The story is fast paced for the most part. There is a section near the end where things got a little too drawn out, but that is a minor issue. And hang on to your panties… there is no sex in this book! I know, right? There are some scenes where you thought it might happen, but no. I liked this aspect of the story. There is a lot of sexual tension, but the characters aren't focused on it because they are fighting for their lives! This is why I call it a sweet romance. Drake and Talia are going to have sex and it is going to be HOT, but not in this book. I am hoping in book #2 we get some action.

This was a nice mix of PNR and urban fantasy. A good gate-way book for those who might want to see what it is like on the other side of the genre fence. Talia is the tough as nails ad executive whose nickname is “The tiger”. She gave up having a life to be at the top, at least that is what she tells herself. The book starts out with what should be the best day of her professional life. Instead she ends up passed out in the gutter. There she meets one of the sweetest and charming vampire heroes. I loved both characters and their little Scooby-doo gang of friends. The author manages to be campy and not cliche which is fun. The book arc finds closure, but the series arc is a small cliff hanger.

If you are looking for a fun and fast summer read grab a copy. I mean who wouldn't want to visit a Dracula theme park?!


“You’re giving me Romania?” Her voice rose on each word, and she came to her feet. She planted both hands on the table and leaned toward him.
“Romania?”
He took a step back and frowned. “What’s the matter?”
“You told me I was getting Fizzola. I can’t do Fizzola and this creepy little country, too.”

“Don’t you want to stay and play with our vampire?”

”Until you strip away all the meaningless crap from your life, you’ll go on being lonely, friendless and without love.” He came to the sofa and ran a finger over her bracelet. “Nice bracelet, by the way. dZi beads if I’m not mistaken. To ward off evil, right? Want to know why they don’t work against me? It’s because I’m not evil, Tal. I’m not evil.” [swoon! That was me, not the character… well she probably did too]

4 “I’m staying to play with the vampire!” Sheep 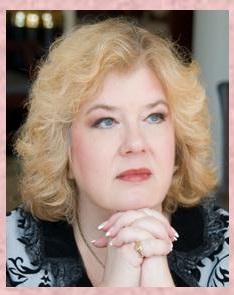 website-FB-twitter
Lara Nance grew up and lived in many cities throughout the South. She loves to write in a variety of genres, but the basis of all of her stories is a great tale of entertaining women's fiction that will take you on an adventure of imagination. Smart stories that make you wonder, and live the romances you dream about.

If you want to escape and lose yourself in a novel, you've come to the right place. Choose your genre and settle in to be entertained. From thrilling mysteries and steampunk tales to paranormal romance and adventure, she's willing to explore a variety of compelling stories full of danger and suspense, along with a touch of romance.

Having been on the fencing team in college and now living on a sailboat convinces her that she was a pirate in another life, or possibly kin to Errol Flynn… However, due to the unfortunate demise of the romantic pirates of the past, she lives out her fantasies, thrills and adventures in her stories. Lara loves to weave interesting true historical tidbits into her fiction which invite the reader to explore further after the novel is finished.

Currently docked in Norfolk, Virginia (until the wind changes) Lara enjoys living on her sailboat and spends time reading, of course writing, indulging a variety of artistic endeavors, cooking and sailing with her husband, Joe and their Yorkie, Rio.