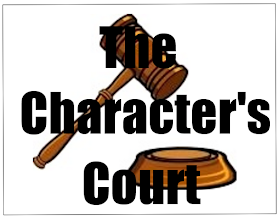 
The Case
The Plaintiff had brought her creator on trial for the many, many trials and tribulations the defendant has made the plaintiff endure, not limited to but including: her alcoholic mother, the murder of her father, her attempted suicide, two decades of unrequited love, forcing her to become the target of an acid-spewing super villain and making her live in a city with the highest concentration of superheroes and villains in the world.

Jennifer Harlow: Your honor, I object to this entire proceeding! My whims and actions should not be questioned. She would not be here, in existence, without me. Who is she to summon me into court?

Judge: Need some help off that high horse, missy? Gonna throw some thunderbolts or a plague of locusts at us too? Haughty is not a good look on you, dear. You’re here now. You will answer the detective’s questions.

Harlow: [muttering under breath] I should so throw a thunderbolt at you. Douche.

Judge: I heard that.

Det. Joanna Fallon: [rising] Thank you, judge. Ms Harlow, I have just one question for you, then you may leave to ruin more lives. And don’t roll your eyes at me.

Fallon: Why the hell are you so damn cruel? What the f*** did I ever do to you? What the hell do you have against me?

Harlow: The truth? [pause] Darlin’, you are my greatest damn creation. Don’t tell your sisters, Bea and Mona, but you are my favorite.

Fallon: [silence for a few seconds] Excuse me?

Harlow: Don’t get me wrong, I love your sisters. They’re a hell of a lot of fun to write, and I hope read, but with you… you let me run with my inner bitch. You don’t pretend to be nice. You say what’s on your mind, are true to yourself, and don’t take shit from anyone. But you’re flawed. So flawed and layered. Quite frankly, I didn't know I had you in me.

Fallon: Be that as it may, you still haven’t answered my question. Why are you so damn cruel to me? You took my father, gave me an abusive mother, then there’s Justin… you've made me love him for two decades when that love is not returned. You gave him Rebecca. Why not me? And to top it all off, I have a man who literally spews acid from his body gunning for me and I don’t know why. Can’t I have one, just one damn good thing in my life?

Harlow: Let’s take my so-called crimes one at a time, okay? Without the murder of your father, you never would have met Justin. You never would have wanted to become a police officer. Without that event, dozens of people would still be in abject misery because they never had Joanna Fallon to save them. Bring their villain to justice. Your mother, well…without her you never would have known what you didn't want to be like. She forced you to mature, survive in hostile environment. Tell me that hasn't served you well in life. And in the end, she brought you closer to Justin.

Fallon: Yeah. Justin. What’s your excuse for him and me? You made me fall in love with him at first sight. Twenty years. Twenty f***ing years of longing, and desiring him, then you create perfect Rebecca for him. Why?

Harlow: You think you’re the only one who’s ever experienced unrequited love? Happens to the best of us, sweetie darling. And it’s been my experience friendships can be a hell of a lot deeper than people believe. Soul mates don’t have to be the person you’re married to. But the truth is, I didn't want yours to be a traditional romance. I can’t think of another book that deals with unrequited love. Can you? And I did give you Harry. Do I get thanks for that? No! He may be your boss, and you may have to keep the relationship secret at present, but doesn't that just add to the fun? He’s a good man, better than Justin in many respects. Don’t look a gift horse in the mouth, sweetie.

Fallon: And Alkaline? You sent a psychopath who shoots acid from his body after me. That’s not a fair fight. How exactly am I supposed to fight against him?

Harlow: You want fair, read a children’s book. Watch a romantic comedy. And do you know how lucky you are? “Oh, brave new world that has such people in it.” You live in one that people in my realm would literally kill to live in. A world of miracles of evolution or God or whatever you believe in. People standing up for what’s right, even if they have to wear a mask to do so. Epic battles between living gods.

Fallon: One you've siced on me for no apparent reason on top of everything else. How—

Harlow: Look, I know I've thrown a lot at you. I do. And I will continue to, but I know you can take it. And you will take it with a gun in your hand and wise ass remark on your lips. I’m not promising you an easy path, or even a happy ending, but I do promise your life will never be boring and quite frankly, happiness is so damn hard to write because it is so freaking boring. Some people are happy riding on a merry-go-round. Little ups and downs but really you see the same thing over and over again. Don’t know about you but I prefer a roller coaster. So scary, so thrilling, it tests your mettle. You get more out of a roller coaster. So buckle up sweetie, and enjoy your highs, lows, and curves. And this is only the first chapter. You've got two more to go, and they will be just as wild and twisty. Curse me all you want, but it will be a hell of a ride. But let’s let the readers be the real judges, shall we? [The defendant rises] Now, unless you want that plague of locusts you mentioned which is totally within my power, I have to get back to work. More lives to ruin. And I’m due for margaritas with the muses. Ciao!


The defendant strolled out of the court, after blowing a kiss to the Judge, with a smug smile on her face.

Judge: Um…so, you, the readers, do you find the defendant’s justifications valid? Does this sound like a world you’d want to live in? Sound off below. 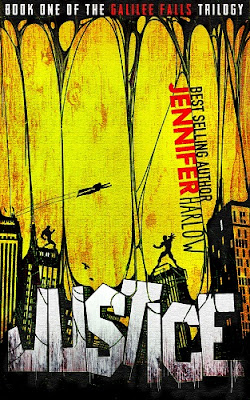 It’s hard being a regular police officer in Galilee Falls, a city with the highest concentration of superheroes and villains in the country. It’s even harder watching your best friend, the man you’re secretly in love with your whole life, planning to marry another woman. Detective Joanna Fallon has to contend with both. When the vilest supervillain in the city’s history, Alkaline, the former crime boss who can shoot acid from his wrists, escapes from the maximum security prison, the whole city is gripped by panic. Leading the pursuit is Captain Harry O’Hara, Joanna’s boss and secret lover, and the city’s champion superhero Justice, who caught the villain last time, much to Joanna’s chagrin. Before her father was murdered in a mugging twenty years earlier, Joanna worshiped the hero, but when he disappeared and failed to save her father, that adoration turned to contempt for all supers. After Alkaline attacks too close to home and targets Joanna as his next victim, tough-as-nail Joanna has to contend with her increasing fear while struggling to choose between her life-long crush and her new-found love.

At turns vulnerable and fierce, equally mordant and winsome, Joanna is an earnest yet emotionally damaged heroine, who despite the tough breaks of her childhood sees the good in people and vow to protect her beloved city at all costs. An ass-kicking petite firecracker with no superpowers of her own, she charges after supervillains unflinchingly, never losing her wit even when facing her toughest fight. With a coy blend of whimsy and vivid imagination, she delivers both humor and thrills in an action-packed and edgy blend of comic book cool, fantasy-noir, and bitter-sweet romance.
Buy link 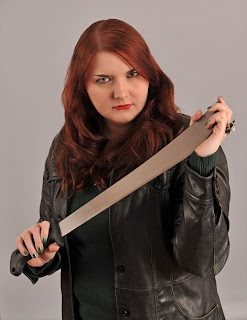 website-Tales From the Darkside Blog -Twitter - Facebook
-Goodreads -Pinterest
Jennifer Harlow spent her restless childhood fighting with her three brothers and scaring the heck out of herself with horror movies and books. She grew up to earn a degree at the University of Virginia which she put to use as a radio DJ, crisis hotline volunteer, bookseller, lab assistant, wedding coordinator, and government investigator. Currently she calls Northern Virginia home but that restless itch is ever present. In her free time, she continues to scare the beejepers out of herself watching scary movies and opening her credit card bills. She is the author of the Amazon best-selling F.R.E.A.K.S. Squad and Midnight Magic Mystery series. For the soundtrack to her books and other goodies visit her at www.jenniferharlowbooks.com