Art By: Ben Templesmith
Price: $2.99
Diamond ID: APR130575
On Sale: June 05, 2013
Series: Ten Grand
Image Comics
"ANGELS NEVER LIE"
FDA (Federal Demon Association) Advisory. Contents contain: one cult church where incantations are encoded into the playlist; one flesh-dwelling, food-obsessed demon; one seer capable of perceiving the spirit world but blinded to this one; one missing woman; one murder; one angel with an agenda of his own; and one rendezvous between supernatural investigator Joe Fitzgerald and the woman he loves, now deceased, in what may or may not be heaven. Warning: do not operate heavy equipment while reading.

"Angels Never Lie," the second issue of Ten Grand, sees Joe following every lead he can to discover what happened to Sarah Thomas, after her sister, Debbie, sought Joe's special talents after she went missing. Joe's reasons for taking the case are two-fold: each case he can solve affords him a chance at seeing his dead lover, Laura, in the afterlife--if only for a few minutes; and the person Sarah was last seen with is the same guy Joe killed two years earlier--the same guy who killed Laura. 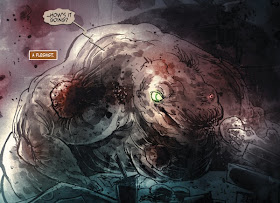 Divine Will, the cult Sarah had apparently joined, is one of Joe's first places to sniff around. And to do that he calls on an acquaintance with a terrible gift for seeing the demons and doorways we were never meant to see. Johnny, the guy with the second sight, struck me as a character that could really be explored further, especially since he only shows up for a couple pages.

Once Joe busts up the party inside the cult's little nondescript headquarters, he finds a demon he hopes has the answers he's looking for, but the gluttonous creature winds up leaving Joe with more questions than he'd bargained for. And when Joe tries to find Debbie to grill her some more about her sister, Sarah, things take a very grim turn.

Evocative imagery and a bevy of brutal characters add up to one of my favorite new comic book series. Between Straczynski's deftness with dialogue and Templesmith's near-psychedelic illustrations, I'm tempted to call it a deadly combination and about as close to perfect as a reader could dare ask for. This issue is a bit of a downshift from the inaugural issue, but the universe has been fleshed out even more, and a new wrinkle introduced that could really sabotage all of Joe's efforts.
Can't wait to tear into the third issue.