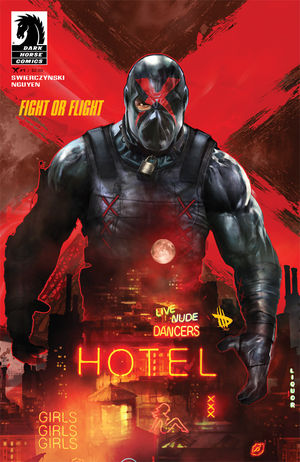 
Preview
The enigmatic vigilante X has shattered Arcadia’s criminal triumvirate, the Three Pigs, and fixed his eye on an even tougher target. But with the police department AND the crime establishment teamed up against him, muckraking blogger Leigh Ferguson may be X’s only ally! The brutal story of Dark Horse’s bloodiest hero begins anew!

X #0 introduced the vigilante extraordinaire, X, through the eyes of the mob bosses he targeted for death. With X #1, Duane Swierczynski and Eric Nguyen continue the story by looking at the ramifications of the X Killer's actions through the eyes of Leigh Ferguson, a newspaper reporter turned blogger amid the city's corruption and crime. 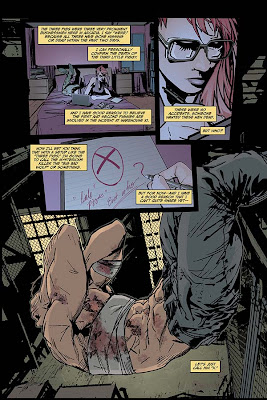 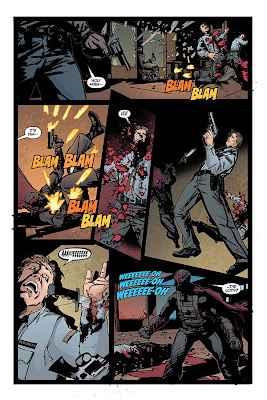 In the wake of the bloodbath inside one of the gangsters' warehouses, the X Killer licks his wounds and gets ready for his next target, while Leigh tries to put the pieces together of who would hunt down the three biggest crime bosses in the city so ferociously--and why? And it looks like one of her first clues comes inside an envelope mailed by one of the gangsters before his untimely end.

Two issues into this series, it seems pretty evident that X is a homicidal maniac with a purpose. If he isn't shredding his enemies into bloody bits, he's maiming them with such intensity it would make a Bengal tiger blush.

I didn't exactly warm up to Leigh, but there hasn't been a whole lot of time yet to fully flesh her out as a character. I suspect Swierczynski and Nguyen will put a little more meat on her bones, X too for that matter, as their paths cross in the next issue.