Not exactly sure why this steampunk anthology didn't get more press for its release June 4. Look at the stellar line up of authors! Hey Penguin Publishing, I want this book for review... just saying. 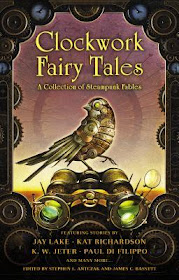 Combining the timeless fairy tales that we all read as children with the out-of-time technological wizardry that is steampunk, this collection of stories blends the old and the new in ways sure to engage every fantasy reader.…

Inspired by Hans Christian Andersen’s "The Red Shoes", New York Times bestselling author K. W. Jeter’s "La Valse" forges a fable about love, the decadence of technology, and a gala dance that becomes the obsession of a young engineer—and the doom of those who partake in it.…

In "You Will Attend Until Beauty Awakens", national bestselling author and John W. Campbell Award winner Jay Lake tells the story of Sleeping Beauty—and how the princess was conceived in deception, raised in danger, and rescued by a prince who may be less than valiant.

The tale of "The Tinderbox" takes a turn into the surreal when a damaged young soldier comes into possession of an intricate, treacherous treasure and is drawn into a mission of mercy in national bestselling author Kat Richardson’s "The Hollow Hounds".

In "The Kings of Mount Golden", Hugo and World Fantasy Award nominee Paul Di Filippo tells the story of a young man’s search for his heritage and a mechanical marvel that lies at the heart of a sinister pact in this fascinating take on "The King of the Golden Mountain".