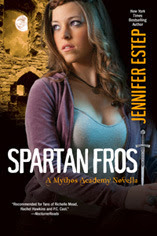 
Professor Metis and Nickamedes say that I'm fine, that Loki and the Reapers don't have a hold on me anymore, but I can't risk it. I can't risk hurting Gwen again. So I'm leaving Mythos and going somewhere far, far away.

I know Gwen wonders what's happening to me, whether I'm safe. I can't tell her, but this is my story.

There's always that fear of being lost when you jump into the middle of a series and I have to admit I was pretty lost at the beginning of Spartan Frost. Not only did I NOT know who the characters were or what they could do, I didn't even know what had happened in the previous book that lead to Logan turning on Gwen. However, that didn't last long and I soon got the gist of what had happened.


After being taken over by the soul of Loki and almost killing Gwen, Logan decides to put space between them. Feeling guilty for what he did, and fearing it could happen again, he leaves Mythos Academy for New York. Unfortunately, trouble isn't far behind.

I normally avoid YA Novels because I just can't relate to younger characters, but I'm glad I gave Spartan Frost a chance. Author Jennifer Estep writes one hell of a YA story! Spartan Frost is a novella, basically it's part of the Mythos Acadamy series but told from Logan Quinn's point of view. Estep can take a cocky, confident teen and transition him into a brooding, angry and doubtful young man with ease that furthers the overall story-line and in general, makes Logan a far more interesting character. After all, no one likes characters who stay the same through six books.

Spartan Frost gave me a small, but potent sample of Jennifer Estep's talent and I'm surprised, but happy to say I will be adding the Mythos Academy series to my TBR.

About the Author:
website-FB-twitter-blog
Jennifer Estep is a New York Times bestselling author, prowling the streets of her imagination in search of her next fantasy idea.
The Elemental Assassin series (for adults)
The Mythos Academy series (for young adults)The Bigtime series (for adults)

Jennifer has worked as a features writer and page designer for a Pulitzer Prize-winning newspaper and has more than 10 years of journalism experience. She’s a member of Romance Writers of America, Science Fiction and Fantasy Writers of America, and other writing groups.