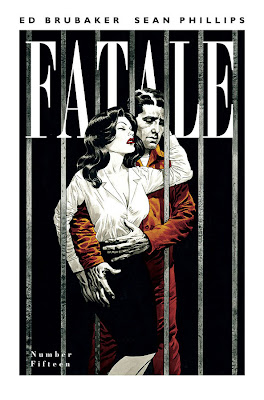 
A NEW ARC BEGINS!FATALE finally arrives in modern times, as Nicolas Lash's research from his prison cell draws out old enemies. And him with nowhere left to run. And remember each issue of FATALE contains extra content, articles and artwork that are not available anywhere but the printed single issues.

I'd been reading some good things about this series from Ed Brubaker and Sean Phillips, but with it being fourteen issues deep I was a little hesitant to take this fifteenth issue for a test drive, since I'm conditioned to reviewing comic books from the inaugural issue onward. Fatale #15, thankfully, feels like the start of a new story arch, making the learning curve a whole lot easier.

Nick Lash seems utterly doomed, but at least he knows it. Framed for murder, his dead uncle's manuscript stolen, his lawyer killed in front of him, and on the run with a man named Nelson who did the killing. Yeah, Nick is doomed.

That's just the prologue though, as the main story goes back to the mid-90s where a struggling rock musician, Lance, robs a bank to fund his band, only to botch the getaway and stumble across a naked beauty on the side of the road, covered in nothing but a bed sheet and a lot of blood. Even weirder is the fact that the blood ain't hers and there's somebody with a basement full of dead women looking for her.

If you like your crime fiction brazen and bloody, Brubaker and Phillips are your guys. Don't ask me how the first part with Nick Lash ties in with Nelson's heist gone awry storyline, at least beyond the femme fatale Josephine, but I think I'm going to enjoy finding out. The main characters all have the classic combination of empathy and ineptitude; guys in over their heads and can't help but dig their own graves a little deeper. With Nelson, all he's really done in this issue is take a strange girl home, but the atmosphere is as powerful as it is pulpy, and leaves things off in such a way that I can't wait to read Fatale #16.

If you're like me, and you haven't bothered with the first fourteen issues of this series for whatever reason, now might be a good time to give the series a chance, because it's either getting good or it's getting even better.